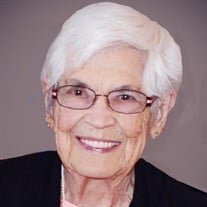 It is with heavy hearts that we announce the passing of Rosella Marshall. She passed in the early morning of August 13, 2020 in Salt Lake City, Utah. Born in Tulare, South Dakota to Fredrick and Hannah (Brugger) Wendland, Rosella lived life... View Obituary & Service Information

The family of Rosella Marshall created this Life Tributes page to make it easy to share your memories.

It is with heavy hearts that we announce the passing of Rosella...