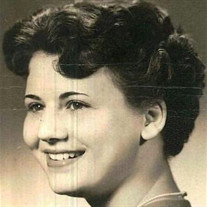 Rosemary Vincent passed away peacefully, surrounded by family on December 14, 2016 in Taylorsville, Utah. Rosemary was born in Jamestown, New York on June 10, 1942 to Joseph and Sally Chiazzese. She would later move to Denver, Colorado where she maintained a long distance relationship with the love of her life, Gerald (Jerry Vincent), whom she would marry in Denver, CO on January 7th, 1961. The two later moved to Salt Lake City, Utah to start a family, where they remained for more than 50 years. Rosemary carried a deep sense of pride in her Italian heritage and exhibited this in her dedication, loyalty and love for her family. She had an intense passion for cooking and could warm your soul with the taste of her recipes, each one carrying a hint of love passed down from her equally devoted mother. Her mind was sharp and intuitive, a gift allowing unique perspective on life and a great sense of humor. When she smiled, she never failed to receive a smile back. Her happiness was always mirrored in those around her, as her smile was forever contagious. Rosemary lost her love and partner in life (Gerald) in March of 2014, a loss that left a deep hole in her heart, but left her with lasting memories and a longing to rejoin him one day. Survived by her children Christine Vincent, Jerald Vincent Jr. (Beth), Stacey Roper (Korry), Anthony Vincent and one brother Leonard Chiazzese (Linda). She is also survived by 7 grandchildren and 11 great-grandchildren. A small, family memorial will be held on a later date. In lieu of flowers, the family requests memorials be made to the American Cancer Society.​​​​​

Rosemary Vincent passed away peacefully, surrounded by family on December 14, 2016 in Taylorsville, Utah. Rosemary was born in Jamestown, New York on June 10, 1942 to Joseph and Sally Chiazzese. She would later move to Denver, Colorado where... View Obituary & Service Information

The family of Rosemary Vincent created this Life Tributes page to make it easy to share your memories.