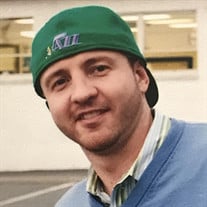 Our friend, father, and confidant Rulon Quincy Gordon passed away Friday, March 24th, 2017 at the age of 39 due to heart complications. He was born in Salt Lake City, UT on February 6th, 1978, but will forever be a Buckeye with his heart in Ohio. Rulon was very lucky to have the friends he did but even more so, we were lucky to have him in our lives. He was so grateful that so many of his friends and family took him in and shared their home with him. He felt that his friends were his brothers and sisters and treated them so. He was always true, caring, and loyal with them. Although he did not do much of this during the closing years of his life, he loved to fish. A couple friends and a night out on strawberry was an ideal night to him. Rulon was rich with wisdom and personal ideals, he knew how to treat the people around which made him a very popular man progressing through his life. He spent lots of his free time being informed through news radio stations, pod casts such as TED talks, even searching up information if he finds that his knowledge on the subject wasn’t attune enough. Rulon and friends would often get in debates for fun; despite any outcome, he was constantly learning and taking away important lessons to shape his understanding of the world around him. Whether you were asking him about: foreign politics, exploration of the endless depths of space or the full roster of the 86’ Mets, Rulon knew. It was a privilege to be able to talk to him and listen to his response regarding anything you needed or wanted to know more about, or just to hear a second parties take on the situation. During this time, Rulon realized how passionate and competitive he was, whether it was boxing, football, or basketball, he wanted to be great at anything he did. He considered himself the MJ of high school sports, not because of his talent but because of his competitive fire and heart. He wanted everyone to try as hard as he did and he did not feel guilty about letting his teammates know. That’s why so many respected Rulon, he not only pushed himself to be better, but pushed the others around him to succeed as well. After High School, Rulon met the love of his life, Hope. His passionate side translated to his love. He said he had never loved someone so much and they were inseparable since. Soon after, Rulon’s true meaning of life began when Quincy Ezekiel Gordon came to this world. Quincy was and will always be Rulon’s world and his number one. Everything he did was to impress Quincy and Hope, which wasn’t difficult because he was their hero and nothing less. After having a series of different jobs Rulon was hired at Zions Bank in Real Estate Management. He quickly made an impact in all areas and was promoted routinely. He thoroughly enjoyed his work and time spent there but nothing compares to the friendships while established there. Soon after he was asked to join the board of the Sharing Place. As with everything he did in life he became extremely passionate about their mission, so much so that they asked him to be the board President. He loved the Sharing Place and was thankful to be a part of the non-profit and what they stand for. Rulon loved all his connections and good friends made in the poker world. Like any other hobby or activity he would invest time into, he expected to be great and was. Poker incorporated psychology, some math and that competition he always looked for so it wasn’t a surprise when one would find out he excelled at this. He was an amazing player, many said he was one of the top players in Utah. But nothing shined more that the kindness he felt for others, no matter his circumstances Rulon would give anything he had to whomever was in need. His heart was truly pure Gold, and Scarlet and Grey. He will be missed like no other, he touched lives wherever he went. It was a rare scene to catch Rulon without a little smirk on his face. He made everyone feel good about themselves and could make anyone laugh, not just smile. That was one of his great gifts, understanding others and knowing when they needed to laugh and be comforted. All said how amazing, caring and loyal he was and his legacy will be felt forever. Friend and family are invited to the viewing on Saturday, April 1st from 9:30am to 11:00am at The Woods on 9th located at 6775 S 900 E, Midvale, UT. Services will begin at 11:00 and the Graveside will be at Salt Lake City Cemetery at 12:30pm. Contributions can be made at gofundme/rulon or the Zions Bank fund set up in his name.

Our friend, father, and confidant Rulon Quincy Gordon passed away Friday, March 24th, 2017 at the age of 39 due to heart complications. He was born in Salt Lake City, UT on February 6th, 1978, but will forever be a Buckeye with his heart in... View Obituary & Service Information

The family of Rulon Quincy Gordon created this Life Tributes page to make it easy to share your memories.