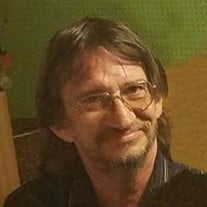 Scott Freeman Clark, 54, returned home to his loving Heavenly Father November 17th 2016 in Ogden Utah. He was born October 15th 1962 in Ogden Utah to Jerry Freeman Clark and Mary Ann Clark-Jaussi. Scott met his soul mate Nina Clark in 1993 and later married August 31st 2000. Scott had an incredible love for semi-trucks. He mastered the 15-gear overdrive at the very young age of 13, following in his father’s footsteps. He continued to drive semi-trucks until he fulfilled his dream of becoming an owner operator (Prisoner of The Farms, Scooter & Nina). He was very dedicated to his business and was proud he could provide for his family. Scott was a loving husband, father, grandfather, son, brother, uncle and friend. He adored his wife, Nina. They were an inseparable pair. Where one was the other wasn’t far behind. Scott also had and undeniable love for his dogs, his truckin buddies, Whisky and Bo. Scott touched the lives of many. He had a smile that was contagious. Scott was extremely generous, he would give anyone the shirt off his back. He always had a hug for everyone. Scott was known as the human compass. If anyone wanted directions, they knew all they had to do was call Scott. Rest easy Scooter. We love you. Scott is survived by his wife, Nina Clark; Mother, Mary Ann Clark-Jaussi; Sons, Zachary Clark & Jacob Clark; Grandchild, Trevor Jean Kramer; Brother & Sisters, John (Debra) Clark, Mike (Jodi) Clark, Brad (Amanda) Clark, Aimee (David) Miller, and Melanie Clark; numerous uncles, aunts, nieces, nephews, and cousins. Preceded in death by: Grandparents, father Jerry Freeman Clark; Uncles, Aunts, and Cousins Service Information: Viewing will be held Friday, November 25th from 11:00am to 1:00pm at the Willow Brook Ward located at 480 W 2000 N, Harrisville, Utah. Funeral Services will follow at 1:00pm. Burial will be at the Hooper Cemetery. Thank you: Thanks to all who have offered support and kind words and to all who contributed to the Go-Fund Me account. It’s greatly appreciated during this hard time.

The family of Scott Freeman Clark created this Life Tributes page to make it easy to share your memories.