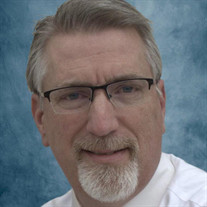 Zoom Link for Scott's funeral: https://zoom.us/j/95087352741 Scott Miller Foster passed away at LDS Hospital on Monday, August 16, 2021 due to complications from Pneumonia & Covid. He entered this world six weeks early on January 2, 1972 at Cottonwood Hospital in Murray Utah to Richard Daniel and Sharon Kay (Miller) Foster. He came home in a Christmas stocking that still gets hung up every year in his home. He is their fifth son and their lives were never the same. He ruined the mission plans of Teri Ann Moss when they met at Dixie College and swept her off her feet. They were married October 9, 1993 in the St. George Temple and he just kept ruining her plans for the next 28 years. Scott served an honorable mission for the church in the Philippines and Atlanta Georgia. It is an absolute certainty that one of his first questions in heaven was “What the heck happened to get me kicked out of the Philippines!” It was the biggest mystery in his life, he now knows the answer. He loved most of his mission companions and all of the people he served. Scott graduated from Bountiful High School. He will always be a Brave, no matter what they change the mascot to. The same goes for Dixie College. Scott is a Rebel through and through! He adamantly opposes the absurd discussion on changing the name. If you want some great discussion at the funeral, just bring this up. Many Fosters and Mosses attended Dixie so expect some lively conversations. Scott got his Bachelor’s Degree in Computer Science from the University of Utah. Can you guess how he feels about being a Ute! He is a Utah Man! Throughout his career Scott worked in many places; Packard Bell, Intel, Pandesic, and MCI. He has many wonderful memories and friends from those places! The last 18 years has been spent with Merrick Bank in South Jordan Utah where he was an Assistant Vice President, Network and Security Manager. Scott loved working at Merrick and loved the people there! He had a lot of passion regarding his work and this led to many interesting exchanges with his co-workers. Many will admit that the most frustrating thing about working with Scott was how often he was right! Now imagine being married to him! Scott was an avid coin collector. He loved that he was able to share this passion with his dad for many years. He makes the best cinnamon toast and eggnog, a talent he learned from his mom. He loved the water, especially the ocean. His favorite vacations included his family and the beach. Every New Year he would blow the conch shell he brought back from Hawaii, a tradition his daughter Mikell plans to continue. Scott would want everyone to know of his testimony and love of the Gospel! He knows and loves his Savior! He passed this testimony on to his daughters and anyone he could. While he struggled with depression and anxiety, it was the Book of Mormon that brought him the most peace. He was so grateful for the Plan of Salvation and knowing his family is forever! Scott is survived by his wife, Teri Ann and his two extraordinary daughters Mikell Inez and Abigail Marie. His parents Dick and Sharon of Bountiful and his brothers; Bill of Bountiful, Dan (Kelly) of Bountiful, Rick (Deb) of Sandy and Bob (Rhonda) of Denton TX. He had many nieces and nephews who held a very special place in his heart. Most adored him, and frankly, some were kind of scared of him. Scott’s funeral will be Saturday, August 21, 2021 at the LDS Church at 1855 W 13400 S in Riverton. The viewing will be at 10:00 to 11:30 am with the funeral following at 12:00 pm. Per Scott’s insistence, the funeral will be one hour and not a minute more. A graveside will be the following weekend on Saturday, August 28, 2021 at the Santa Clara Cemetery in Santa Clara Utah. We ask that everyone take a moment and share memories of Scott at www.serentityfhs.com. He would love that his daughters could continue to get to know him through those who were a part of his life.

The family of Scott Miller Foster created this Life Tributes page to make it easy to share your memories.