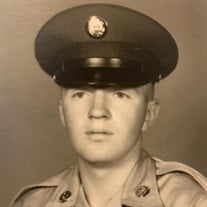 Scott Griffith was born on June 22, 1946, in Salt Lake City, Utah. He is the son of Clifford Richard and Lois Amelia Griffith. He is the youngest of four boys, with a little sister at the end of the family. Scott passed away from a cancerous tumor on November 4, 2020. He valiantly lived with this cancer for 2 ½ months. He was well cared for during his time of suffering by his loving children and wife. He was raised in Lake Point, Tooele County, Utah. He worked hard on the family farm with his dad and brothers. He loved the Oquirrh Mountains that were so close and spent many hours hunting and hiking in them as he was growing up. He graduated from Tooele High School and attended the University of Utah. He served two years in the U.S. Army during the Vietnam war but was blessed to be stationed in Germany. He married Susan Marie Thompson on November 23, 1973. This union was solemnized in the Salt Lake Temple. He retired from the United States Postal Service where he worked for many years and provided well for his family. He was a faithful member of the Church of Jesus Christ of Latter-Day Saints and held many positions including being a worker in the Jordan River Temple. He loved his family and was a great father and husband. He especially loved camping and hunting with his children and wife. He enjoyed traveling with his family, friends and relatives and visited many parts of the world. He is survived by his wife, Susan, and 6 of his 7 children, daughter-in-law Christine, sons Bryan (Jamie), Niels (Natalie), Cody (Randilin) and daughters Gina, Rabecca (Scott), and Liesl (Stephen), 23 grandchildren and 7 great grandchildren, his sister Sharla Hansen and brother Monte Griffith. He was preceded in death by his parents, two brothers (Grant and Larry) and his oldest son, Brent. The funeral services will take place Saturday, November 7th, 11:00 a.m. at 895 W. 4800 S., Taylorsville, for family and close friends. (a viewing will be held at 10:00.) Scott will be buried in the Lake Point, Utah, Cemetery. There will be a graveside service for the family.

Scott Griffith was born on June 22, 1946, in Salt Lake City, Utah. He is the son of Clifford Richard and Lois Amelia Griffith. He is the youngest of four boys, with a little sister at the end of the family. Scott passed away from a cancerous... View Obituary & Service Information

The family of Scott Clifford Griffith created this Life Tributes page to make it easy to share your memories.