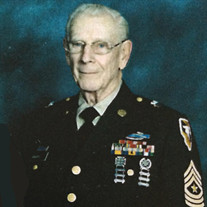 Sargent Major Vernon Ellsworth Brakke age 90 passed away the 21 Oct 2015 of natural causes. He was born the 1 February 1925 in Billings, Montana to Tilmer K and Blanche Garland (Langstaff) Brakke. In his youth, Vern attended grade and middle school in Billings and graduated from Senior High School. He then enlisted in the military and served in WW II, serving 4 years active duty and he continued for the next 27 years in the armed forces. He met his sweetheart, Lenora J. Smith and they were married the 25 January 1948 in the First United Brethren Evangelical Church, Billings, Montana. They were baptized into the LDS church and were sealed in the Idaho Falls, Idaho temple in 1958. Six children were born to this union. Vickie (dec), Dennis (dec), Arleen (James) Young, Terri (Steven) Richins (dec), Dona Brakke and Curtis Brakke. Through the years, Vern worked in Billings at Safeway’s, Archie Cochrane Motors (28 years) and retired after working at Bob Smith Lincoln Mercury. He and Lenora decided to make a change and moved to Utah where he continued working as a security guard. Vern was very talented but, his greatest love was gardening. He could grow anything and everything. His vegetable gardens flourished and his flowers were exceptionally large and beautiful. Everyone was blessed with the many bouquets given with only the purpose of sharing their beauty to brighten someone’s day. He loved people. He, also, loved mechanics. His dream was to someday, have a garage of his own and be able to ’tinker ‘on cars. Vern is survived by his wife, Lenora J. (Smith) Brakke, daughters Arleen (Jim) Young and Dona and 2 sons, Curtis and Shane, 27 grandchildren, many great grandchildren, and one great-great granddaughter and a sister Betty (Gerry) Toole and a sister-in-law- Jeannette F (Wilder) Brakke. He is preceded in death by his parents, 5 brothers- Chuck, Everett, Leonard and Robert, one sister-Patty Knebel, two daughters, Vickie and Terri (Steven) Richins and a son-Dennis, a grandson-Kyle W. Brakke and 2 granddaughters-Ketra K Brakke and Courtney Dawn Young. Vern is preceded in death by his parents, 5 Brothers-Chuck, Everett, Leonard, Robert and one sister, Patty, two daughters, a son, a grandson, Kyle Wayne Brakke, granddaughters, Ketra K Brakke and Courtney Dawn Young. He is survived by a sister Betty (Gerry) Tool, two daughters, one son, numerous nieces and nephews, grandchildren , grgrandchildren and gr-gr grandchild. There are so many left behind who love you and will miss you so much but, we know we will see you soon. Vernon and Lenora had just moved from Roy to South Jordan, Utah. A memorial service was held Saturday, Oct 24 for Vern with his family and friends. Military Services will be held 2:00 P.M. Friday Oct 30, 2015 at Utah Veterans Cemetery 17111 South Camp Williams Road Bluffdale, Utah 84065.

The family of Master Sergent Vernon Ellsworth Brakke created this Life Tributes page to make it easy to share your memories.