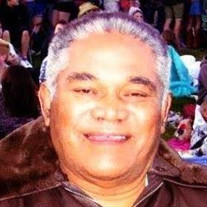 Setaleki Fualau Piutau Tongi, 69, passed away on the 14th of April 2016 in Grantsville UT. He was born on the 25th of May 1946 in Neiafu Vava'u to Funaki Piutau and Losehina Fangupo. He married his late wife Seneuefa Asuao on the 5th of June 1971 in Laie Hawaii. Setaleki grew up in his family in Ha'ateiho where he attended elementary and high school in Liahona High School. He completed his tertiary education in BYU Hawaii where he was awarded a Bachelor of Arts and Master of Education degrees. He also met and married his wife Sene during his college years in Hawaii. They raised their family of 8 children in Ha'ateiho Tongatapu. His chosen career was teaching High school and Intermediate students. He served faithfully in all of his callings in the LDS church and was a valued member of the community. He was a dedicated father and husband to his children and wife. He loved life and pursued many personal interests and hobbies like farming, sports, music, fishing and agriculture. He loved spending time with family and friends. He was survived by his children Rodney Guy Tongi, Lupepe Piutau Tongi, Cassandra Kaumavae, Ioane Tongi, Fuarosa Taue, Milika Tongi, Losehina Tongi and Luseane Kau. He was also survived by his siblings Utulongoa'a Bloomfield, Niuolafa, Napa'a Piutau and Sione Atimoa Tongi. He was preceded in death by his beloved wife Seneuefa Asuao Tongi, his brother Taniela Tongi and his parents Funaki Piutau and Losehina Fangupo. Services are under the direction of Peni Malohifo'ou of Serenity Funeral Home His funeral services are as follows: Saturday 23rd April 2016 @ The Magna Tongan 2nd Ward 3151 Broadway Street, Magna UT Viewing @ 9am - 12pm Funeral service @ 1 - 2pm Burial @ 3pm at the Grantsville City Cemetery on Main Street in Grantsville UT. We would like to thank all our family and friends who gave us much comfort through prayers, meals and comforting words during this difficult time. We love and appreciate every expression of love and condolences and every effort to make this difficult experience bearable as we say goodbye to our loving father. God bless you all.

Setaleki Fualau Piutau Tongi, 69, passed away on the 14th of April 2016 in Grantsville UT. He was born on the 25th of May 1946 in Neiafu Vava'u to Funaki Piutau and Losehina Fangupo. He married his late wife Seneuefa Asuao on the 5th of June... View Obituary & Service Information

The family of Setaleki Fualau Piutau Tongi created this Life Tributes page to make it easy to share your memories.