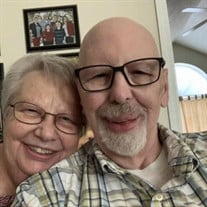 Our husband, dad, grandfather, great grandfather, and brother, Sheldon Anderson passed away on May 20, 2022, at the age of 81 from complications of PPS (Post-Polio Syndrome). His sweetheart of 58 years, Kaye Rich Anderson, was by his side and held his hand as he passed through the veil into the next life. Perhaps the most sought-after love story is the one that never ends- and theirs is truly one for the ages. Sheldon Leroy Anderson was born to Weldon and Louise (Stephensen) Anderson on October 16, 1940, the first of six children. He loved his siblings and stayed close to them throughout his life. He contracted Polio when he was 11 years old. The disease mostly affected his legs, and doctors weren’t sure if he would ever walk again. He was a fighter and was able to recover enough to walk (although difficult and painful). This didn’t stop him from living a life full of joy and adventure. Sheldon graduated from Granite High School in 1958 and enrolled at BYU the same year. His loyalty to BYU never waned. He was an avid fan who was proud to say, “I bleed blue.” Prior to serving an LDS mission, he met his wife, Kaye, at a church dance, “The Gold and Green Ball,” which is where their love story began. He started courting her and it was safe to say, she stole his heart right from the beginning, and vice versa. He served a mission for the Church of Jesus Christ of Latter-day Saints in Northern California from 1960 to 1962. Upon returning he continued dating Kaye and they were married in the Salt Lake LDS temple on November 26, 1963. Together they raised five children. They cherished their marriage and family. Rarely was my dad’s name spoken without my mom’s name paired with it. They were known to everyone as “Sheldon & Kaye”; never one without the other. Besides his wife and family, Sheldon’s greatest joy in life was music. He had a marvelous baritone voice and was accepted into the Mormon Tabernacle Choir (as it was called at the time) in 1976. Kaye traveled the world with him as his mission companion sharing the message of the gospel of Jesus Christ through music. Sheldon was a gifted poet. His favorite collection of poems is known as “Flowers in August.” In August 1976 he wrote a poem and gave flowers to Kaye for no special reason, it was just because he loved her. This started his tradition of giving her a new poem and flowers every August for 45 years. He absolutely loved coming up with creative ways to present it to her (often enlisting the help of others to carry out his surprise). If you knew Sheldon, you knew he wasn’t shy about quoting his poems to almost everyone, but only a few of them were published (at the persuasion of others). He has written poems for his children, grandchildren, friends, neighbors, and church youth groups. Sheldon had many passions and hobbies including target shooting, reloading, hunting, camping, playing the piano, listening to music, photography, chess, and building computers. He loved to read and share his love of reading with his children and grandchildren making frequent outings to the library with them where they would spend hours exploring. He worked in the financial department of the LDS church as an accountant for 37 years. Those who worked closely with him appreciated not only his dedication and expertise but also his quick wit and occasional verse. After retiring he enjoyed helping his grandchildren learn to read and volunteered as a reading tutor at several of their elementary schools. He was a devoted member of the church, and some of his favorite callings were choir director, gospel doctrine teacher, and bishopric member. Sheldon and Kaye served a mission as employment specialists where he came up with a new nickname for her: “Sister Honey.” Of course, he wrote a poem/song about it. He is preceded in death by his parents and two great-grandchildren, Isaac and Cassidee Barlow. He leaves behind his devoted wife, Kaye (aka Sister Honey), his children John (Mariann), Stephen (Rebecca), Rob (Rebekah), Caroline Evans (Keith), Becky Smith (Todd), as well as 17 grandchildren and 8 great-grandchildren (with one on the way). He will be missed by all who knew him! Until we meet again… In lieu of flowers, please send donations to the Humanitarian Fund of the Church of Jesus Christ of Latter-day Saints.

Our husband, dad, grandfather, great grandfather, and brother, Sheldon Anderson passed away on May 20, 2022, at the age of 81 from complications of PPS (Post-Polio Syndrome). His sweetheart of 58 years, Kaye Rich Anderson, was by his side and... View Obituary & Service Information

The family of Sheldon Leroy Anderson created this Life Tributes page to make it easy to share your memories.