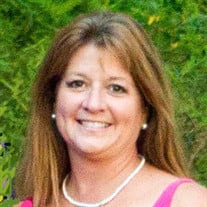 Sheryl Renee Murphy Gibson Heyburn- Our beloved Renee Gibson, age 46, was suddenly called home June 12th, 2014. Renee was born July 29, 1967 to Patrick and Nancy Murphy in Bristol Tennessee. She graduated Dunbar High School in 1985 and attended West Virginia University and later moved to Idaho to attend ISU in (1993) and met her “Sweetie”, the love of her life, Dean G Gibson. They were married July 27, 1996 at the St. Nicholas Church in Rupert. Together they were blessed with two boys, Matthew Dean (15) and Patrick Joseph “Joey” (13) who were her everything. Renee lived her life for her family. She spent much of her time devoted to her church working for St. Nicholas School and volunteered with many church functions. She will be greatly missed by her family, friends and community. She was an exemplary example of a wife, mother, daughter, sister, aunt and friend. She lived life to the fullest enjoying many trips with her family especially to Disneyland and Roatan. She also loved spending time with her friends and gave so much to everyone around her. Renee made everyone feel important. God blessed her with kindness, love, happiness, humor and a very beautiful smile. She put everyones needs in front of her own, she was there for everything and everyone. She will be deeply missed by everyone whose lives she has touched. Renee is survived by her loving husband, Dean G Gibson; two sons, Matthew and Joey; and don't forget her dog Teddy; parents Patrick and Nancy; brothers Mike (Sheri); Brian (Sonja) and Tim (Deanna); sister Teresa (Dennis); In-laws Dennis and Tina Dickson; Gary Gibson (Shirley); Brother and Sister in-laws; Jeff (Miranda) Gibson, Krissy (Rick) Honeyman, Kris Dickson, Kelly (Monica) Dickson and many beloved nieces and nephews. She is preceded in death by her grandparents. The funeral will be held Thursday, June 19th at the St. Nicholas Catholic Church in Rupert 802 F Street at 11am. In lieu of flowers, the family suggests contributions be made to the St. Nicholas Catholic School P.O. Box 26 Rupert, Idaho 83350.

The family of Sheryl Renee Murphy Gibson created this Life Tributes page to make it easy to share your memories.