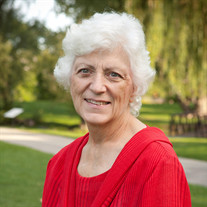 Shirley Raeleen Hardman Rizzuto (72) returned peacefully to her Heavenly home surrounded by her family on Wednesday, November 16th, 2016. She was born December 25th 1944 to James Ralph Hardman and Rose Elizabeth Hopfenbeck Hardman. She grew up in Salt Lake City, UT and at the age of 5, her mother passed away and her father married Vera Chisholm Garrett. She and her brothers Jim and Neal were immediately blessed with two sisters, Marie and Verae, and these five were later joined by their youngest brother Arland. She graduated from Granite High School and served an LDS mission in Detroit Michigan (Great Lakes Mission) from September 1966 to March 1968. She married Steven Clark Rizzuto on October 16th 1970 in Salt Lake City, UT and they were later sealed for time and eternity in the Salt Lake LDS Temple on February 22nd, 1972. Shirley is the proud mother of 9 children and grandmother of 22 grandchildren. Shirley’s greatest loves include her husband Steve, her children and grandchildren, genealogy, gardening, temple work, German Chocolate cake and Almond Roca. She will be remembered for her constant service to her family and her unwavering faith in and testimony of her Savior, Jesus Christ. She is survived by her husband Steve, her children, Rose(Samuel)Kruger, Letitia Rizzuto, LeiOna (Joel) Meza, Steven (Kaye) Rizzuto, RaeLene (James) Hoffman, Monica (Adam) Crain, Preston (Aimie) Rizzuto and Angelita( Jordan) Peterson, 22 grandchildren, 3 brothers, 2 sisters and numerous nieces and nephews. Preceded in death by her parents James and Rose Hardman, step-mother Vera Hardman and her son Paul Rizzuto. Funeral Services will be held on Tuesday, November 22nd, 2016 at 11:00am at the Alta Heights Ward 1475 East 8600 South, Sandy, UT. Viewing will be from 9:00 to 10:45 that morning preceding the funeral service. Internment: Salt Lake City cemetery. Shirley’s family wishes to extend a special thanks to the caring staff of Huntsman Cancer Hospital and Rocky Mountain Hospice who helped make her final journey so peaceful. Your caring and love have been invaluable. Thank You! In lieu of flowers, please consider a donation to the LDS Temple Fund or Huntsman Cancer Institute. Condolences and memories can be shared at www.serenityfhs.com

The family of Shirley Raeleen Hardman Rizzuto created this Life Tributes page to make it easy to share your memories.