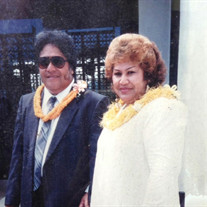 Siaosi Ufi To'omalatai, 71, returned home to our father in heaven on January 5, 2016 at Jordan Valley Medical Center in West Jordan, Utah, surrounded by his family. He was born November 6, 1944 in Lalovae, Apia, Western Samoa to Akenese Tupuola and Ufi Lauvao To'omalatai. He married Gagaifolevao Manumaleuna in Navu, Apia, Western Samoa on October 10, 1966. They were sealed for all time and eternity on March 21, 1992 in the Laie, Hawai'i Temple. Siaosi was a highly skilled worker, operating heavy machinery at just 15 years of age. He also held positions as a mechanic, taxi driver, and farmer. Siaosi did public machine operating work in Samoa for 5 years until he moved with his wife and children to Hawai'i where he was employed at BYU Hawaii. He worked at BYUH for 35 years until his retirement in 2009 . He was lovingly called the "Samoan Elvis" by those who knew him, both for his striking resemblance to the late singer, and his love for his music. He was famous for his customized cars and love of motorcycles. Always active, always engaged, and always inventing. A humble man by nature, he treated all those who he came in contact with like family. He is survived by his wife Gagaifolevao; children: Lana (Fuifatu), Paco (Heidi), Taylor (Ashlee), Siaosi Jr. (Kahea), Olando (Saniie), Johnny, Renon (OJ); grandchildren: Lisalei (Rio), Rodney, Eliza, Lauren, Sylvia, Akenese, Jarvis (Leonahenahe), Jase, Annesha (Kace), Meagan, Mason, T.J., Taylee, Teagan, Jasmine (Rebel), Chance, Tiara, Siaosi, Talia, Feleti, Olando (Roxy), Makaveli, Ethan, Fiti, Grete, Hyrum, Oliver, Manu, Manatua; great-grandchildren: Tuli, Triton, Rayne, Raven, Kawika, Rebel Jr., Zelia, Ziah, and Aizaiah; siblings: Lana Pe'a Jakicevich, Luamanu Ulugia To'omalatai, Makelita Fewster (Rod), Ieti To'omalatai, Opini To'omalatai, Paega To'omalatai, Utumalafata Ward, and Miki To'omalatai He is preceded in death by his parents, brother Peni Lauvao, sister Maina Smales, and granddaughter Victoria To'omalatai. We would like to extend our sincerest thanks to all those who have ever shown love to our father, grandfather, and great-grandfather over the years. We are profoundly saddened by his passing and highly appreciative of the many memories being shared that show his true nature as a warm and gentle man. He has encountered many great people in his life, and we hope that those who thought of him as a dear friend or like family, will join us in remembering and celebrating his life. The viewing will take place on Thursday, January 14, 2016 at the Oquirrh Point 2nd Ward on 6270 W 7000 South, West Jordan, Utah 84081 from 8 a.m. to 11:30 a.m. followed by the Bishop's service 12:00 p.m. to 1:30 p.m. Following the service, the burial will take place at West Jordan Cemetery at 7800 S 1300 W, West Jordan, UT 84088.

The family of Siaosi Ufi To'omalatai created this Life Tributes page to make it easy to share your memories.