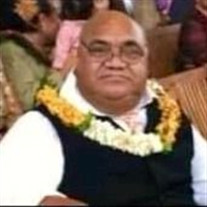 Has returned home peacefully to our Heavenly Father with his family by his side on Sunday, May 25th, 2014 in Salt Lake City, Utah, after a long hard fight against cancer. Born to the late Simote and Finau Holonga Kaihau Tu'ifua on January 31,... View Obituary & Service Information

The family of Siaosi Kaihau Tu'ifua created this Life Tributes page to make it easy to share your memories.

Has returned home peacefully to our Heavenly Father with his...