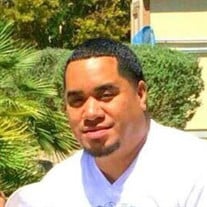 Sione Tufui Taumoefolau 12/23/1982 - 3/1/2017 Sione Tufui Taumoefolau also known to everyone as “Fui”, returned to our Heavenly Father in Riverton, Utah on 3/1/2017 at the age of 34. Sione Tufui is the 5th child of 7 children from Selai Langi and Tolofi L. Taumoefolau. He is survived by his wife Heilala Hopoate Taumoefolau, Selai Langi (4), Selu Kymberlee (3), siblings: Katalina Aholei, Mafi So’o, Sosaia, Joseph, Tauveli, Norman Bentley. Fui was born on 12/23/1982 in Southern California, he graduated from Garden Grove High School in 2001. Fui married Heilala Hopoate his sweetheart and eternal companion on 10/7/2011 and sealed for time and all eternity on 12/21/12. After moving to Utah from California, Fui began working for Prestige Financial as an account manager and later promoted as Assistant Vice President in the collection department. He was called to serve as secretary in the Elders quorum presidency in the Riverton 19th ward. Fui was full of life, fiercely loyal, and always put the Lord first. He loved his wife, two little girls, family and friends. He extended that love to everyone and anyone he met. He lived his life with an eternal perspective, having immense faith and trusting in the Lord always. He lived to serve others, gloried in the simplicity of life, and found joy in the process of his journey. A funeral service and viewing will be held to celebrate his life and legacy, scheduled from 9-12pm March 7, 2017 at Riverton 19th Ward 12691 S 3600 W, Riverton UT. Burial following at the Riverton City Cemetery 1500 W 13200 S. Luncheon at Riverton 19th Ward. All are welcome to attend and celebrate Sione Tufui’s life. The family would like to thank Serenity Funeral home (Peni Malohifo’ou), Riverton 19th Ward members, Taumoefolau family, Hopoate Family, and friends.

The family of Sione Tufui Taumoefolau created this Life Tributes page to make it easy to share your memories.