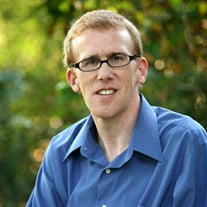 "Once in a while someone amazing comes along, and here I am!" - Tigger Spencer Stephen Smith, our amazing superhero, passed away November 16, 2015 peacefully and surrounded by his biggest fans- his family. Spencer was born August 22, 1977 to Valree Brown and Stephen Smith. He grew up in Kearns, and graduated from Kearns High School. He was a proud and loyal cougar. He went on to complete job training at the Jones Center, and the day he graduated was one of his proudest and most exciting days. Spencer loved work and was the fastest pizza box builder we've ever seen. He applied 100% of his ability and energy to every task. He worked hard and he played hard. We'll miss his impish smile and his knock-knock jokes. He loved his Nintendo DS, watching Spiderman and Ninja Turtles, coloring, and could beat everyone he met at Memory. He was an awesome basketball player. He was a Denver Broncos fan, and bled orange and blue through and through. He loved music and even when confined to wheelchair or bed had rad dance moves we only wish we could duplicate. He was a brave and intrepid adventurer. He traveled to Yellowstone, Lava Hot Springs, Las Vegas, Disneyland, San Diego, and even to Denver to see his beloved Broncos play. He made a trip to the video store an event to remember. He loved root beer, pudding, and strawberry shakes. He was the bravest guy we know. Spencer is survived by his parents Jim and Valree Brown, and Stephen and Diane Smith; brothers Travis (Natalie) Smith, Trevor (Stephanie) Smith, Greg Brown, Tommy Brown, Andy Brown, and Kyle Brown; sisters Terilyn (Jeff) Noorda, and Bonnie (Jeremy) Foy; grandparents Warren and Beverly Lewis, and Bill and Blanche Smith; as well as lots of nieces, nephews, aunts, uncles, and cousins that love his guts. Spencer inspired us all with his amazing spirit and sweet simple faith. We know he's gathering loved ones and friends who have gone on before him and is throwing an awesome reunion party before starting his mission. He fought the good fight, he finished his course, he kept the faith. God be with you 'til we meet again, Buddy! Spencer's family would like to thank all his nurses at Woodland Park and his awesome nurses and doctors at the University of Utah Hospital. His funeral and viewing will be held Saturday November 21, 2015. Viewing from 9-10:30, and funeral to follow at 11 at Western Hills 4th Ward 5107 S 5600 W. Internment at Riverton Cemetery 13200 S 1500 W. Please share memories and condolences at www.serenityfhs.com

"Once in a while someone amazing comes along, and here I am!" - Tigger Spencer Stephen Smith, our amazing superhero, passed away November 16, 2015 peacefully and surrounded by his biggest fans- his family. Spencer was born August 22, 1977... View Obituary & Service Information

The family of Spencer Stephen Smith created this Life Tributes page to make it easy to share your memories.

&quot;Once in a while someone amazing comes along, and here I am!&quot;...