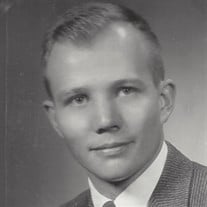 Stanley George Morrill, age 83 peacefully returned to his Heavenly home on Wednesday November 28th, 2018 in Draper UT. He was born on July 4th, 1935 in Tridell UT to Lloyd Grant and Keren (Bartlett) Morrill. Stanley married Gwena Fay Mckee on Sept. 10, 1958 in Salt Lake City UT. As a young man, Stanley served a mission for The Church of Jesus Christ of Latter-day Saints in the Northern States Mission. He attended Utah State University and Brigham Young University obtaining Bachelor’s and Master’s Degrees. He briefly served active duty in the Army. Stan spent his career working for The Church of Jesus Christ of Latter-day Saints in various positions in the Seminary and Institute Program. The family lived in multiple places, including Idaho, Arizona, Ontario CAN, South Dakota, Colorado and Utah. Stan expanded and built up the Indian Seminary Programs in many of the places he lived. Stan and Gwena raised a large family, adopting 10 of their 12 children. He very loving and patient and spent his life paying attention to the needs of the people around him making personal sacrifices to serve his family and others. He was a man of hope, faith, and charity; he demonstrated those characteristics throughout his life with his family, friends and even strangers. He and his wife, Gwena had the opportunity to travel to countries in 5 continents over their 60 years of marriage. They also served three senior missions for The Church of Jesus Christ of Latter-day Saints. He is loved and will be greatly missed by his wife Gwena, his children, KaeLyn (Ray) Ericson, Rose (Grant) Montgomery, Shelly (Roger) Schroeder, Debbie Garner, Cindy Sorensen, Virginia (Randall) Graff, Robert (Beth) Morrill, Leland Morrill, Sharon (Randy) Harter, Keith (Shelly) Morrill, Adam Morrill and Shaun (Wayte) Davill. He will also be missed by 22 grandchildren and 15 great grandchildren. He is survived by 1 brother, 3 sisters, and numerous nieces, nephews, and cousins. He was preceded in death by his parents, 2 brothers, a grandson, and a great granddaughter. Friends, family and any who have been touched by Stan’s life are invited to attend funeral services, in Draper and Tridell Utah as follows: • Viewing - Sun. Dec. 2, 2018 from 6:00 – 8:00 PM at River View 7th Ward Chapel on 11420 South 700 West, Draper UT. • Mon. Dec. 3, 2018 at 11:00 AM there will be a viewing followed by funeral services at Noon in the same Draper location. (Riverview 7th Ward Chapel on 11420 South 700 West, Draper UT). • On Tues. Dec. 4, 2018 there will be a viewing and funeral beginning at 11:00 AM at the Tridell Ward Chapel, in Tridell UT. Graveside services will follow at Tridell Cemetery.

The family of Stanley George Morrill created this Life Tributes page to make it easy to share your memories.