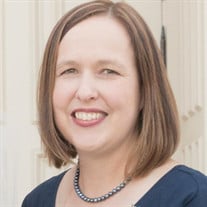 Stephanie Shaw Nielson March 16 1976 ~ November 18 2018 Stephanie Shaw Nielson passed away November 18, 2018 from complications due to cancer. Stephanie was born March 16, 1976 to Roy and Dianne Shaw in Alexandria, Virginia. She was the 5th of 7 children. She graduated from Thomas Edison HS in Virgina and went onto Ricks College (now BYU-Idaho) in Rexburg, Idaho. She studied mathematics until it became, for her, too theoretical. She then switched to computer science because it looked "fun". It was here that she met her future husband, Heath Nielson. Upon graduating and transferring to BYU, Stephanie and Heath married in the Washington DC LDS temple. She was so excited to begin a family of her own that she graduated from BYU with her bachelor's degree, 7 months pregnant with her first of 6 children. She was a dedicated mother who delighted in spending time with her kids. She was always trying to find ways to help her kids grow, build upon their talents and help them succeed. She spent countless hours driving her kids to various events, attending recitals, concerts, competitions and plays. She freely gave of her time wherever it was needed and to whomever needed it, from helping coach her son's soccer team to volunteering in a child's school classroom. She had a love for music. Proficient in playing the piano and flute, she looked for opportunities to perform in her local LDS congregations and was a participant in the Sounds of the Seasons choir/orchestra for 12 years. She could frequently be found at the piano bench learning to play a new song. She encouraged all of her children to play, and was known to yell out corrections from all corners of the house whenever a practicing child misplayed a chord. She loved flowers, particularly roses. It seemed each year a new rose bush would appear around the yard. She was frequently found weeding or pruning the flower beds, admiring the beautiful colors that spring and summer provided. She made effort to find the joy in every situation, never allowing herself to sulk. She laughed frequently and easily, and never took herself too seriously. When any of her kids were unhappy she would make faces at them until the smiles inevitably burst forth. Diagnosed with stage IV ovarian cancer after her youngest child was only a year old, the prognosis looked grim. But she fought courageously for 7 years. The treatments and surgeries took their toll, and often robbed her of her vitality, but she went forward with such a quiet determination that most were unaware of the pain she endured. Stephanie is survived by her parents, Roy and Dianne Shaw; her siblings Kevin (JayneAnne), Christine (Dan), Allison (Greg), Gordon (Melissa), Marilee (Roger) and Daniel (Kami); her husband Heath and children; Emily (Cody), Kyle, Alicia, Laura, Kendra and Melanie. She will be sorely missed. Her legacy of a life well-lived will forever be an inspiration to us, and her impact in this world will continue to remain ingrained in those who knew, and loved her, for generations to come. We look forward to our eventual, eternal reunion. A viewing will be held on Friday, November 23, 2018, from 6-8 pm (MST) at the Church of Jesus Christ of Latter-day Saints Sunstone Chapel, 11543 South Keystone Drive, South Jordan, Utah 84009. An additional viewing will be held for family on Saturday, November 24, 2018, from 9:30-10:45 am (MST) at the Sunstone Chapel, followed by the main funeral at 11:00 am (MST). Donations can be made in memory of Stephanie, in lieu of flowers, to the Huntsman Cancer Foundation via the following means: (Online Donation): https://give.huntsmancancer.org/page/5121/donate/1 Women's Cancers --> Ovarian Cancer In Memory of Stephanie Nielson (Phone Donation): 801-584-5800

The family of Stephanie Shaw Nielson created this Life Tributes page to make it easy to share your memories.