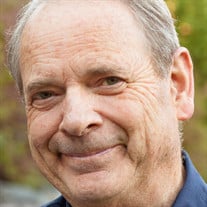 Stephen Boyd Felt Orem, Utah July 28, 1943 - July 29, 2018 Stephen Boyd Felt, beloved husband and father, passed peacefully on Sunday, July 29, surrounded by his loving family. He was born in Ogden, Utah, to William Carlyle Felt and Mae Douglass, the youngest of four children. The family moved to San Francisco when he was a baby and Steve lived in the Bay Area until departing for an LDS mission to Central Germany in 1963. He attended Brigham Young University, where he met and married “the most beautiful girl,” Sally Wilkerson. Steve is survived by Sally and eight children: Linda Hardman (Daniel), Mary Anne Grant (Richard), Susan Yorgason (Aaron), Stephen (Tanya), William (Brekke), Joseph (Victoria), Sarah Felt and Sharlynn Davis; Steve’s sister, Kay Ruff; as well as 23 grandchildren and 1 great-granddaughter. He was preceded in death by his precious grandson Gage Allen Davis. Steve loved the Gospel of Jesus Christ and cherished his testimony of the Savior and Redeemer of the world. He served faithfully in many callings and especially loved serving as a home teacher and on the high council in a BYU student ward and most recently as a temple ordinance worker both in the Mount Timpanogos and Provo Temples. He and Sally have greatly enjoyed their work as addiction recovery missionaries in Provo. Steve received his Bachelor’s degree from BYU and his Master’s of Public Administration also from BYU. He worked at BYU in I.T. Services at from 1969-2005. Steve was a walking miracle. He had pioneering heart surgery at Stanford University Hospital at the tender age of 10. Later he had valve replacement surgery at age 50, and a third heart surgery with double valve replacement July 10, 2018. Steve loved all animals, especially birds and dogs, and kept many as pets. He enjoyed music, and played banjo and guitar in a band as a teen. He was the ultimate handyman and could repair any household item. Steve had creative talent and invented many tools and exercise equipment for himself. He loved the outdoors and walked regularly. He played tennis, racquetball and recently became a fan of pickleball, which he enjoyed playing with his wonderful wife and many of his kids and grandkids. He loved discovering new interests and talents, most recently oil painting. He was a wonderful father and a sympathetic ear in any crisis or time of need and all who knew him called him a dear confidant and gentle friend. He was passionate about many things but above all, he treasured his wife, his family, his friends and his testimony of the gospel of Jesus Christ. Services will be held on Friday August 3, at the LDS Chapel located at 310 North 100 East in Orem. The viewing will be from 9 to 10:30 AM with the funeral to follow at 11 AM.

The family of Stephen Boyd Felt created this Life Tributes page to make it easy to share your memories.