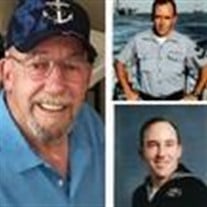 Stephen F. Greenwell, passed away on August 3, 2019, in Magna, Utah. He was born on June 11, 1955, in Fort Rucker, Alabama to Ruth Laverne Rowan and Robert Joseph Greenwell. He married Cindy Greenwell, in Magna, UT on June 11, 2010. Stephen was born into a military family, his father was a retired Army officer, who took his family to many different places during a 23-year military career. He left home early to pursue other interests that included a wide variety of skills such as electrician, carpenter, machinist, welder, oil rig worker, truck driver, and a laser tech. He was considered a Jack of all Trades because he could anything once he set his mind to doing something. He lived in 15 different states over his colorful life. Most notably, he served honorably in the United States Navy as a Basic Electricity and Electronics, Fire Control Tech, 1st Class, for 5 years. He was an avid motorcycle rider and belonged to the Sober Riders and often worked with several charities with his motorcycle club. He was generous with his time and loved helping other people when he could. He is survived by his wife, Cindy, his children Christian and Justin, his step-children Jay, Jerry, Joe and Josh, 12 grandchildren, 2 great-grandchildren, his brother James and his sisters, Christi and Michele, as well as many nephews, nieces and cousins. He is preceded in death by his parents, Ruth (Laverne) and Robert (Bob), his oldest brother, David. Stephen will be interred at the Veterans Memorial Cemetery, on Friday, September 06, 2019. There will be a graveside service at 3PM, with full military honors. Please share memories and condolences at (www.serenityfhs.com.

The family of Stephen Ford Greenwell created this Life Tributes page to make it easy to share your memories.