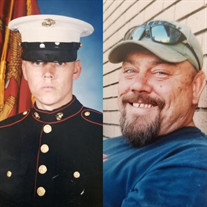 Stephen Linner - Graveside Service Time: Jan 28, 2021 01:00 PM Mountain Time (US and Canada) Join Zoom Meeting https://us02web.zoom.us/j/84591892464?pwd=M2N2RnpLUnA0YUQxcS9aTklHYlJwUT09 Meeting ID: 845 9189 2464 Passcode: 164432 Stephen Erich Linner- Pleasant Grove, UT Aug 14, 1977- Jan 20, 2021 Stephen Erich Linner was called to guard the pearly gates of heaven on Jan 20, 2021. On Aug 14, 1977, he became the first-born son to Raymond and Kathleen Linner in Salt Lake City, UT. Stephen attended Cottonwood High School and enjoyed playing soccer, hiking, camping and causing trouble throughout his high school years. Shortly after high school, he discovered a profound love for the United States Marine Corp and enlisted as soon as he could. If you know Stephen, then you know how PROUD he was to be a Marine. He was active duty as a Field Radio Operator for 4 years and achieved the rank of Corporal. Because of his love for the Marines and his country, he volunteered to go back and serve again for Operation Enduring Freedom after the 9/11 terrorist attacks. Through his service, he was able to travel the world spending time in California, Japan, Australia and Hawaii, to name a few. These years of service taught him core values of honor, courage and commitment that defined who he was. A significant number of stories came from his time as an active duty Marine and he wasn’t shy to tell you about it. After serving our country, Stephen worked in various jobs as a technician in banking and technology. The great outdoors, motorcycles, music and the 49ers were a few deep passions of his. His gift of gab enabled him to make a friend anywhere he went, and you certainly walked away enlightened of his opinion. Stephen was a strong-willed, hardworking man with a heart of gold who was always willing to lend a hand. His family was his life and he always worked hard to take care of them. Stephen was blessed with 2 beautiful children, Eric and Addie. Later in life he met his loving fiancé Sandi Wolfley and was able to become a father to his bonus son Ryder. He truly felt his family circle was complete. He is survived by his fiancé Sandi, son Eric, son Ryder, daughter Addie, mother Kathleen, sister Teresa (Joe), sister Rachel (Shawn), brother Joey, brother Danny, brother Adam, extended family, the Wolfley family and close friends. Preceded in death by his father Raymond, nephew Porter, Grandma and Grandpa Linner and Grandma Lasker. Due to COVID restrictions, there will be no funeral service. A graveside viewing will be held on Thursday Jan 28, 2021 at 12:30 pm followed by a military graveside service starting promptly at 1:00 pm at The Utah Veterans Memorial Cemetery and Memorial Park. 17111 1700 W. Bluffdale, UT 84065 -Once a Marine, always a Marine. Semper Fi. OORAH!-

The family of Stephen Erich Linner created this Life Tributes page to make it easy to share your memories.