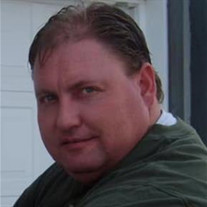 Stephen Andrew Williams was born August 6, 1970 and returned to his Heavenly Father on March 25, 2019 in West Jordan, Utah surrounded by his loving family after a brave fight with cancer. He was born in Salt Lake City, Utah to Lynwood & Phyllis Williams. He served a LDS mission to Little Rock, Arkansas. He was sealed for time and all eternity to Caleen Carter in the Salt Lake Temple on December 3, 1993. Stephen was an eagle scout & served in the scouting program for several years. Stephen owned a siding company for several years. He also loved working with his hands & loved working with his wife on several different projects around the house & loved to do wood working. He was a hard worker and always provided for his family, his last job he worked as a benefit advisor. Stephen was very artistic and loved to draw, his favorite medium was colored pencils. His favorite thing to do was to spend time with his family they were his everything. Some of their favorite things to do together as a family were playing games, going on trips, going up to the mountains a have a picnic by the water, as well as going camping. He touched the lives of many and cherished the relationships he had, he was loved by all and will be missed by his family & friends He is survived by his Wife Caleen Williams, his Children Kelsey Williams, Braxton Williams, Jaden Williams, his Mother Phyllis Bendixsen, his siblings, Steve (Terri) Bendixsen, Cindy (Mark) Thacker, Annette Bohne. He was preceded in death by his Daughter Caitlynn Williams, Lynwood Stephen Williams (Father), Blaine Dee Bendixsen (Step Father). Viewings will be held Friday, 6-8pm, and Saturday, 10-10:45am. Funeral Services will be held Saturday, 11:00 am at the Welby Stake Center, 8841 South 4800 West West Jordan, UT 84088.

Stephen Andrew Williams was born August 6, 1970 and returned to his Heavenly Father on March 25, 2019 in West Jordan, Utah surrounded by his loving family after a brave fight with cancer. He was born in Salt Lake City, Utah to Lynwood & Phyllis... View Obituary & Service Information

The family of Stephen Andrew Williams created this Life Tributes page to make it easy to share your memories.