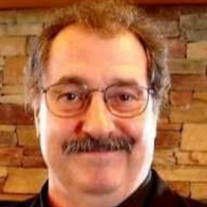 Steven Pace Creer Passed away on 12/25/2020 peacefully at home, from complications due to liver failure. He was born in Fresno, California on September 10th, 1952. He is the youngest of 3 children (Preston Creer, Becky Creer-Trevey) born to Allen B and Annabel Creer from Spanish Fork , Utah. In 1972, at only 20 years old, Steve started working for the Rio Grande Railroad. This was the beginning of a 41-year career where each trip is different even if you are going over the same miles of rails time and time again. Steve was blessed with the “Gift of Gab” and was given the nick name of 'Jaws' by his fellow Railroaders. From 'Pin Head' to 'King Pin' there was no job on the rails that Steve could not do. He retired with the Union Pacific in 2013 as an Old Hog that had been around the block many years. One of Steve’s many passions was music. He was a professional D.J. in his younger years and more recently has become “D.J. Steve” on his Facebook page. His favorite genre of music was oldies and classic rock, and he enjoyed sharing his knowledge and love of music. In fact, he was the handsome D.J. at the club where he met the love of his life, Kathy Hendrixson. They married on May 14th, 1982 and together raised 2 daughters and 2 sons, whose posterity brought Steve and Kathy their greatest joy of 7 grandchildren and 1 great grandchild. He was proceeded in death by his parents, Allen and Annabel Creer. He is survived by his wife, Kathleen Creer, daughters, Brandy McCoy and Carly Creer, his sons, Daniel Bergstrom (Kristi Bergstrom) and Brian Bergstrom (Merrilee Frandsen), his Grandchildren, Tre, Jorden, Haylie, Alexis, Audri, Aspen and Angela and his Great Grandchild, Quinten. “ At the end of the day, help me to be grateful for the people I have met, the things I have moved, the circuits I have restored, the signals I have maintained and the false partial activations I have repaired. Remind me to leave the bulletin in the lead locomotive, to secure the reverser and to leave the cab clean for the next crew. After I mark off, give me restful sleep - help me to mark on tomorrow with renewed vim, vigor, and a sense of purpose. At the end of my run, I hope to meet the Superintendent and shake his hand. I hope to hear him speak the words, 'Well done, good, faithful, safe and dedicated servant.' I hope to see many of my colleagues and friends who made my journey possible, who have enabled me to see many wonderful things and places along the way and who have helped me arrive safely at my home terminal.” Please consider a donation in lieu of flowers, as a formal funeral service is being postponed due to the Covid-19 Pandemic. https://gofund.me/b9ca7286 An open house for close family and friends will be held on Saturday January 9th from 1pm – 4pm at the home of Dan and Kristi Bergstrom.

Steven Pace Creer Passed away on 12/25/2020 peacefully at home, from complications due to liver failure. He was born in Fresno, California on September 10th, 1952. He is the youngest of 3 children (Preston Creer, Becky Creer-Trevey) born to... View Obituary & Service Information

The family of Steven Pace Creer created this Life Tributes page to make it easy to share your memories.