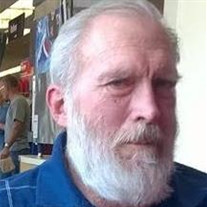 Steven Lynn Nielsen, 70, passed away on Tuesday, June 19, 2018, in West Jordan, Utah. He was born on May 29, 1948 in Logan, Utah, to Richard “Dick” Edward Nielsen and Arleta Scothern. He married Ginger Lee Eugster on May 31, 1969 in Bountiful, Utah. Steve and Ginger had four children, Sean Richard, Heidi “Brat,” Jared Max, and Joshua Steven. Steve later married Glenda Johansen in Tillamook, Oregon on September 10, 1999. Steve spent most of his life and young adult years in South Davis County Utah, and graduated from Viewmont High School in 1966. After a short stint in the navy, he worked for 35 years in shipping and receiving at what is now Unisys. After retirement, Steve and Glenda moved to Bandon, Oregon, and enjoyed their time together on the Oregon coast. Steve enjoyed outdoor activities in the southern Utah desert as well as on the Oregon coast, communicating over his CB radios, riding his motorcycle, and collecting guns, rocks, and fossils, and coins. He is survived by his wife Glenda; mother Arleta; children Sean, Heidi (Mike), Jared (Annette), and Josh (Megan); stepchildren Rochelle “Shellie” Beebe (David), Greg Johansen (Edith), and Nicole Clark (Chuck); 10 grandchildren; 8 step-grandchildren; 2 step-great-grandchildren; and brothers Allen (Karen), Kent (Pam), and Ronald “Ron.” Steve was preceded in death by his father, Richard. Per Steve’s request, there will be no burial site or funeral service. There will be a small gathering for immediate family to celebrate his life. Steve will be missed dearly but after a difficult struggle with PSP, his family is comforted to know he no longer suffers. Please share memories and condolences at www.serenityfhs.com.

The family of Steven Lynn Nielsen created this Life Tributes page to make it easy to share your memories.