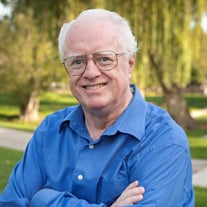 Webcast link https://youtu.be/Np8sk0mQOZU STEVEN CLARK RIZZUTO SEPTEMBER 20, 1943, TO SEPTEMBER 20, 2021, Our amazing Daddy, Steven Clark Rizzuto returned to his heavenly home on his 78th birthday, September 20th, 2021. What an incredible birthday present, to be reunited with his eternal companion and sweetheart, Shirley! He is the son of Ruth Palmer and Pasquale(Pat) Rizzuto. Born in Fillmore Utah, Daddy grew up in Kearns. Graduating from Granite High School in 1961, he joined the US Air Force and served as an aircraft radio mechanic until his honorable discharge in June of 1965. In 1964 he married Tamara Hasler and together they had two daughters, RuLynn (deceased) and Allison. They were later divorced. On February 22, 1969, he met Shirley Raeleen Hardman and after an 18-month, long distance courtship, they were married on October 16th, 1970, and sealed in the Salt Lake Temple three years to the day from when they met, February 22, 1972. Together they have nine children. Daddy was known as a quiet man that loved God, his family, his country, and dancing. His testimony of the divinity of our Savior Jesus Christ will live on in the lives of many, many, people. He did not get the opportunity serve a mission as a young man so one of his greatest desires came to fruition when he and Mom served as missionaries for The Church of Jesus Christ of Latter-Day Saints in Malaysia from to 2004-2006. They made many friends and were able to spread their love of God to the people in Malaysia. He served faithfully throughout his life in numerous church callings and for much of his later years, served weekly in the temple doing ordinance work for hundreds of the family members whose names were prepared by Mom. Unbeknownst to many, Dad loved dancing and he was good at it. Some days, he would come into the house after work, plow through the herd of kids greeting him at the door and go to find his sweetheart, who he affectionately called Downey, just so he could dance with her for a minute. He passed on that love of dance to several of his children and no family party was complete without at least one dance. As Dad departed this life for eternity, he was greeted on the other side of the veil by his eternal companion Shirley, son Paul, and daughter RuLynn along with a host of family and friends. That reunion must have been sweet indeed and had to include some dancing. Dad is survived by 9 of his 11 children who will miss him every day. Allison (Jay) Brewer, Rose (Sam) Kruger, Letitia Rizzuto, LeiOna (Joel) Meza, Steven Jr.(Kaye), RaeLene (James) Hoffman, Monica (Adam) Crain, Preston (Aimie), Angelita (Jordan) Peterson. He also leaves behind numerous grandchildren and one great-grandchild. Services will be held on Friday, Sept 24th 2021 at the Falcon Park Ward of the Church of Jesus Christ of Latter-Day Saints located at 9119 South 1300 East, Sandy, UT. Viewing will be from 10:00am to 11:45am with funeral services to follow at noon. Internment will be at the Salt Lake City Cemetery. In lieu of flowers, please consider donating to the Veterans of Foreign Wars (VFW) Salt Lake Chapter or to the Temple fund of the Church of Jesus Christ of Latter-Day Saints.

The family of Steven Clark Rizzuto created this Life Tributes page to make it easy to share your memories.