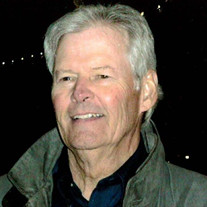 As I sit in reflection, I am feeling for words that I might use to describe and pay tribute in this small way to the beautiful and extraordinary man that I have had the 54 year long honor and blessing of sharing life with. It isn't always easy to see this beauty and magnificence in one another, life gets in the way, but from this new vantage point, I find I can see it perfectly now. What follows is just a brief glimpse of Stuarts time line, so to speak. Stuart Edward Allen was born in Sioux Falls, South Dakota on November 20, 1941 just 18 days before the bombing of Pearl Harbor. Yet,while the rest of the world was at war, Stuart's boyhood was spent in the beauty and seclusion of a remote mining town called Stibnite, high in the mountain wilderness above Boise, Idaho. Stuart's world was a young boy's wonderland of pine trees, wildlife, swimming holes, fishing streams, huckleberry bushes, ice ponds and snow drifts. His brother Charles and sister Annie were born in Stibnite. When Stu was 15, his father passed away leaving his widowed mother to support the family. With a little creativity, freshman Stuart managed to enlist in the Idaho Air National Guard to help the family financially. That began his 14 year tenure of military service. The last 9 years of which he spent serving proudly in the Naval Nuclear Submarine Service during the Vietnam era. Part of his nuclear power training at that time took him to a Nuclear Power Facility outside of Idaho Falls, Idaho..my hometown. I was a young college student then, waiting tables at the Skylark Cafe on weekends. His friend Danny brought Stu to the Skylark one night and we fell in love over the counter! We were married 10 months later in the Idaho Falls temple. As newlyweds we were stationed in San Diego, California where our two inimitable sons Clayton Stuart and Brandon Samuel were born. After his military discharge, Stuart graduated from the California Highway Patrol Academy as a State Trooper and served for three years before returning to Idaho. Stuart joined the Idaho State Police in Idaho Falls. Our two adorable daughters, Darci Dawn and Melinda were born there. Our first family home was located kitty-corner from my childhood home where Grandma and Grandpa Price still resided. 1195 Bannock was the hub of activity for the the 18 aunts and uncles and 65 grand kids that lived nearby. Our lives were intermingled and those 5 years were filled with family memories to last a lifetime. Stuart took a position as a motorcycle officer outside Boise. He and his partner, Pat McDonald, spent their summers patrolling the same mountain roads through the same familiar mountain towns that led to the Stibnite of his youth. He relished that return to his rural beginnings. As a family man, Stuart was uniquely and innately gifted. He was a man of order and integrity and excellence. He was conscientious of the smallest detail and always dependable, no matter what. He was a craftsman and mechanically skilled. He could fix anything. There's a redneck saying that goes, “He may not be handsome, but at least he's handy.” Stuart was both. I look back upon his sterling qualities now and marvel really. He was a man among men. I honor him. After his retirement, the fullest measure of Stuarts love was brought out by his grandchildren. He adored them. He called them and texted them faithfully. He knew what was going on in their lives. He remembered their events, cheered them on, he counseled and advised them. Grandpa Stuart was the subject of several essays and tributes and scrapbooks written by the grandchildren over the years with titles like, “My Favorite Person”, “The Most Influential Person in my Life” and “My Hero.” May his beautiful legacy live on in their lives...in all our lives. He will be dearly missed and his memory cherished and remembered always. Stuart is proceeded in death by his son Brandon (Traci). He is survived by his wife of 53 years , Gladys, his son Clayton (Alicia), and daughters Darci (Christian) and Melinda (Garret) and 18 grandchildren.

As I sit in reflection, I am feeling for words that I might use to describe and pay tribute in this small way to the beautiful and extraordinary man that I have had the 54 year long honor and blessing of sharing life with. It isn't always easy... View Obituary & Service Information

The family of Stuart Edward Allen created this Life Tributes page to make it easy to share your memories.

As I sit in reflection, I am feeling for words that I might use...