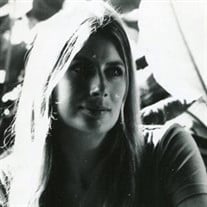 Susan Warren, 76, a resident of Draper, Utah passed away on March 19, 2018 from heart failure. She died at home, surrounded by her family, friends and beloved pets. She is survived by her life long friend John Levitt, sisters Kay Warren and Janet (and Bill) Cargill and, daughters Kimberly Deneris and Karin Wilson, and three grandchildren, Miles Deneris, Max Deneris and Anthea Deneris. Susan was born in Portland, Oregon in 1941 and grew up with her parents Edward Warren (a football coach and teacher) and Geraldine Warren (nee Tamiesie) and two sisters on a filbert farm in the Willamette Valley. She often spoke of her idillic childhood in a rural farming community, running free in the woods, riding her beloved horse Goldie, and playing with her best friend Carolee. She always talked about how close all the neighbors were, always willing to help each other bring in a harvest or during an emergency. Her family often went to the rugged Oregon beaches or berry picking in the mountains for holidays, and she always grew nostalgic when talking about her childhood in the Pacific Northwest. She was a quiet, independent child who cared more for her horse and books then people, but she was also very athletic like her father, and was part of a gymnastic tumbling team that toured the state, and entered horse racing events, and was even featured in Life Magazine during one of her horse competitions. In high school she continued to excel in gymnastics and acting, graduating in 1959. Later that year she married Robert Douglas Wilson and had two daughters, and as the 60’s progressed she and her younger sister Janet became part of the folk music scene in Portland, singing in bands like the PH Factor Jug Band. Although she never pursued a professional music career, music and singing were a life long passion for her and she sang in small folk groups with her sister and friends on and off over the years. After leaving Oregon, she moved often with her young family, living in many places like the redwood forests of northern California and on a sailing boat in Hawaii, finally settling in Utah after her divorce in 1969. She spent many years living and working at the ski resorts in Alta, Utah and made many life long friends there, among them John Levitt and Barbara Bannon. Throughout her life she followed her passions for books, horses, history, and art. Her favorite art medium was paper, and she created many collage books, art cards, and loved to decorate victorian doll houses. She loved old bookstores and libraries, filling her home with giant art books, obscure horse breeding and champion thoroughbred horse books, and tombs on English castles and ancient kings. She watched horse racing religiously and loved feeding wildlife and taking in stray cats. She was also very good with babies, and as she got older, her grandchildren were her greatest joy and she loved creating a warm haven for them, filled with books and art and her love. Her graceful and artistic personality, keen mind, nurturing heart, and healing spirit will be deeply missed. Please share memories and condolences at www.serenityfhs.com

Susan Warren, 76, a resident of Draper, Utah passed away on March 19, 2018 from heart failure. She died at home, surrounded by her family, friends and beloved pets. She is survived by her life long friend John Levitt, sisters Kay Warren and... View Obituary & Service Information

The family of Susan Warren created this Life Tributes page to make it easy to share your memories.

Susan Warren, 76, a resident of Draper, Utah passed away on March...