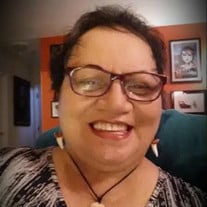 Susanne Ti Settle, 66, passed away on Friday, August 21, 2015, in her home in Provo, UT, surrounded by her immediate whanau (family). She was born May 4, 1949 in Martinborough, New Zealand to Ruanui Hamahona and Ti Temaari Waiti MacDonald. Susanne & David (Honey) were married and sealed for time and all eternity in the Hamilton, New Zealand LDS Temple on June 22, 1974. Sue’s main focus and priority in life was always her sweet Honey as well as both immediate and extended whanau. Nothing was more important, which is why she was always deeply involved in passing on her cultural knowledge to her children by way of music and genealogy that her father had begun when she was just a little girl in the Wairarapa (NZ). As an LDS member, Sue had a great love for the Savior and always strived to pattern her life as a faithful servant. From the moment she left the Land of the Long White Cloud called Aotearoa New Zealand shortly after she married Honey, they settled in Laie, Hawaii with their five (5) children. While in Laie, she built many close bonds/friendships and unofficially adopted many kids by way of teaching seminary for the LDS Church. Along with teaching, she was tremendously involved in the community, bringing all nationalities together in making the community strong, united and diverse – regardless of your nationality, status and where you came from. There wasn’t one solitary resident in Laie, Hawaii who didn’t know “Sister Settle”. Sue continued her work even after moving to Provo, Utah in the summer of 1998, where she spent the remainder of her life. Even though she had to leave Hawaii, it did not derail Sue’s passion for her culture, community and genealogy work. Sue had the capacity to touch the lives of every single person she came in contact with throughout the world! Her zest-for-life and “small kine” personality attracted the most distant stranger. Those who know Sue, know that there are not enough words to describe the countless lives she’s touched along with her work that she has accomplished for her family, friends, the church and communities that she has lived in. Sue is survived by her “Honey”, David Settle (husband); Children - Ti Temaari (Keala) Settle (daughter), Kalani Rhodes (daughter); Chad Settle (son); Priscilla Settle (daughter-in-law); Kelly Tufuga (daughter); Jonathan Tufuga (son-in-law); Ryan Peterson (daughter); Sreeve Peterson (son-in-law); Grandchildren - Apirana Peterson (grandson); Tamatea Peterson (grandson); Anahera Peterson (granddaughter); Darian Settle (grandson); O’shea Settle (grandson); Kaiaarahi Peterson (grandson); Zion Peterson (grandson); Saul Rhodes (grandson); Jayden Settle (grandson); Suitofagaoali’i Tufuga (granddaughter); Joel Rhodes (grandson); Tu’ifao Tufuga II (grandson); Urijah Settle (grandson); Siblings - Haumoana MacDonald (brother, deceased); Lorraine MacDonald (sister); Louis MacDonald (brother); Melvin MacDonald (brother, deceased); Yvonne MacDonald (sister); Charles MacDonald (brother); Hemi (James) MacDonald (brother); Karl Shadlock (brother, deceased); Ruanui MacDonald (brother); Myra MacDonald (sister); LaRene MacDonald (sister); Helen MacDonald (sister, deceased); Alexander MacDonald (brother); Romaine MacDonald (brother); Kenneth MacDonald (brother); Edeena Shadlock Collie (sister) Service Information Saturday, August 29, 2015 (11:00 a.m.) Provo Utah Stake Center 1315 East 900 South Provo, UT 84606 Burial Information Provo City Cemetery 610 S State Street, Provo, UT 84606 The Settle Whanau wishes to thank all those who have expressed their aroha (love) and have given their support during this difficult time. It has been tremendously felt and it will never be forgotten! We would like to especially thank Peni Malohifo’ou and the Serenity Funeral Home for their assistance and support in taking special care of our wonderful whaea (mother) & kuia (grandmother) by organizing her funeral to be an amazing celebration of her life. The Settle whanau kindly requests that any flower arrangements and/or a memorial gift(s) be sent to the Settle home in Provo or to the Provo Utah Stake Center prior to the funeral, Saturday morning. The Settle Whanau 2345 South Tennessee Avenue Provo, Utah 84606 To send flowers or a memorial gift to the family of Susanne Ti Settle, please visit our Sympathy Store.

Susanne Ti Settle, 66, passed away on Friday, August 21, 2015, in her home in Provo, UT, surrounded by her immediate whanau (family). She was born May 4, 1949 in Martinborough, New Zealand to Ruanui Hamahona and Ti Temaari Waiti MacDonald. Susanne... View Obituary & Service Information

The family of Susanne Ti Settle created this Life Tributes page to make it easy to share your memories.