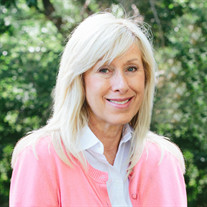 After a brave battle with colon cancer, Suzanne Lifferth Stevens passed away at home on August 20, 2019 surrounded by loving family. The ninth of thirteen children, Suzanne was born October 25, 1954 in Murray, Utah and grew up in Granite and Midway, Utah and Fortine, Montana. She married James Nelson in 1974 and eventually settled in Bothell (Seattle area), Washington to raise their five children. She devotedly nurtured and taught her children. Suzanne was forever active and energetic with a great love of the outdoors, camping, hiking and most anything to do with water. She was a gifted artist, resolute foodie and was passionate about painting, cooking, and creating. Following divorce, Suzanne moved to Denver in 2010 and remained there until 2013 when, by the hand of God, she married Kim Stevens in the Draper Temple. Her time back in Utah was years of love, peace, and joy. She served God and family at every opportunity and was adored by all who had the privilege of her company. Suzanne’s life reflected her tenderness by being a model of kindness. She radiated a divine light in her countenance and demeanor. Love and warmth flowed effortlessly and ceaselessly from her. She loved nothing more in the world than being with her family and sweet grandchildren, a tenderness which extended abundantly to Kim’s family as well. Her faith was continually exercised as she sought and followed divine guidance. Prayer, scripture study, and service were the keys she used to develop a powerful and close relationship with God. She was an active and faithful member of the Church of Jesus Christ of Latter-day Saints and truly loved the Lord. Her favorite callings were “ward missionary” and working with the young women. She is preceded in death by her parents, Henry and Wanda (West) Lifferth, daughter-in-law, Ream Alameel Nelson, and sister-in-law, Judy Lifferth. She is survived by: her husband, Kim Stevens; son, Dakota Nelson; daughters, Rachelle (Carson Jones); Chrissy (Spencer Ellsworth); Katelyn (Mike Hansen); Analiese (Mason Rowley); siblings, David (Shirley); Yvonne (Gary Moore); Ann (Joe Nelson); Wesley (Merry Lynn); Ernest ; Robert (Marilyn); Sandy (Gary Johnson); Karl (Paula); Richard (Carole); Sally (David Jensen); Gretchen (Kevin Knott); and Tanna (Andy Mosalsky). Suzanne is truly angelic and graduates with honors from this life. Earth’s loss is heaven’s gain. She will prepare a place of glory for all her posterity that choose to follow her example. She now will continue to love and support her family from the other side of the veil. Suzanne’s viewing will be Friday, August 23rd from 6-8pm at 575 E 13800 S in Draper, Utah. Funeral Services will be held on Saturday, August 24th at 12pm at the same location with a viewing prior from 10-11:30am. Interment will be at Larkin Sunset Gardens at 1950 E. 10600 S. in Sandy, Utah. Suzanne loves flowers.

After a brave battle with colon cancer, Suzanne Lifferth Stevens passed away at home on August 20, 2019 surrounded by loving family. The ninth of thirteen children, Suzanne was born October 25, 1954 in Murray, Utah and grew up in Granite and... View Obituary & Service Information

The family of Suzanne Stevens created this Life Tributes page to make it easy to share your memories.

After a brave battle with colon cancer, Suzanne Lifferth Stevens...