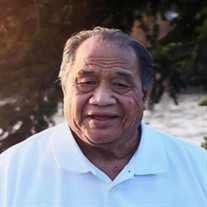 On April 27, 2020, our loving father, Talesi Ieti Te’o, returned home to our Heavenly Father. In Vaiola, Sava’i Samoa on August 12, 1942 he was born to Ieti and Lolini Te’o. Dad married his eternal companion, Lemalie Va’aulu, on February 22, 1980 and was sealed for all time and eternity in the Los Angeles, California LDS Temple. Dad was born and raised with a total of 14 siblings (biological & adopted) in Samoa where he lived up until the time he met his companion in California. Talesi made a life for himself and his family, and became a social worker for the state of California. That career for Los Angeles County lasted for 25 years of serving others. It was one of the greatest things he loved to do - serving. If anyone knew Dad, they knew how much music was his life. Anything from conducting choir, playing the piano, singing, & hula dancing. We can never go to a family function without him doing the little grass shack hula - it was his trademark in this world. If he slapped you, it was his way of telling you that he loved you. Dad was a God fearing man - all because of his parents and his eternal companion that continued to push him to be better. Dad loved his eternal companion, children, & grandchildren so much that he was willing to do anything for them. He left an impression on our lives with big shoes to fill, but with a legacy that will live on forever. Dad is survived by his children, Edna Te’o, Shawn Te’o (Becky Livingston Te’o), Mckay “AJ” Fa’asou (Richelle Esteves Fa’asou); his grandchildren, Canaan Auva’a, Zoey Te’o, McKay Fa’asou, Mateo Fa’asou, Ephraim Te’o, and Maverick Fa’asou; his siblings, Matte Te’o (Gloria), Isaako Sautia, Fofoga Roe (Laupula), Olevia Tafiti, Vienna Duffy, Iuleti Te’o; and many nieces and nephews and their children. Talesi was preceded in death by his eternal companion, Lemalie; mother, Lolini; father, Ieti; sisters, Aveolela, Nora, Fofoga, Tineia’i, Dollie; brothers, Loe, Malaela, Kiona, Togamau, Ieti Jr, Peleki, Lisona; grandson, Ioramo; and many other family members now on the other side of the veil. Funeral Services will be held via a live webcast due to Covid-19 precautions provided by: Serenity Funeral Home May 6, 2020, Wednesday Family Service: 11:00AM-12:00PM (webcast) Followed by Burial Service at: Valley View Memorial Park & Funeral Home at 12:30PM-1:00PM 4335 West 4100 South West Valley City, UT 84120

The family of Talesi Te'o created this Life Tributes page to make it easy to share your memories.