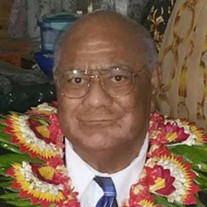 Our loving father Talite Fe’ofo’ofani Lapu’aho 64 passed away peacefully on Sunday June 28, 2015 in West Valley City, UT. Talite was born February 17, 1951 in Vaini Tongatapu Tonga to Minoneti and Fine Apihala Lapu’aho. Talite married Lesieli Ongokovi Filimoe’atu on June 7, 1973 in Nuku’alofa Tonga. Their marriage was later solemnized in the Los Angeles LDS Temple on September 2, 1978. Talite comes from a family of 11 siblings he was the 3rd youngest. Talite’s father Apihala mentored him in the Tongan culture growing up. Talite would do anything that would make his parents proud. He attended Liahona High School and was very active in sports. He participated in rugby, track and field, but his favorite was volleyball. In the mid-60s he was chosen to be the captain for Princess Pilolevu volleyball team. Talite joined the Tongan army and served 4 years. During this time Talite served for a year as one of the royal bodyguards for the King. Talite and Lesieli served an LDS mission together from 1974 to 1976 throughout the islands of Tonga. During their mission Lesieli gave birth to their oldest son Samipeni, they also had their 2nd oldest son Taniela who they laid to rest in Koulo in 1976. In 1978 Talite moved from Tonga to Hawaii to California to meet with his wife and sons Samipeni and Mark. In 1979 Talite moved his family to Utah where he worked various jobs up to 3 jobs at a time saving money until he was able to purchase his home in West Valley. During this time Talite continued lifting and body building. They lived in Utah for 5 years, before moving back to California. In 1988 he met the CEO of gold’s gym and was given a free membership. He trained and met other lifters who were from a wrestling camp, he was invited to join the camp and pursue a wrestling career where he was given the wrestling name “Golden Bear”. His wife and children were his biggest fans. After a couple of years he moved his family back to Utah to raise his children. Due to his diabetes in 2006 his foot was amputated and he began dialysis treatments 3 times a week. Talite received a kidney transplant in March 2015. In the end it was his heart that couldn’t keep fighting. Talite had a passion for life and was a simple family man. He honored the chance of representing his family name Apihala at Tongan functions or any time he was given the opportunity to speak. He enjoyed taking his family to reunions. He loved deeply and truthfully. His family and the gospel of the LDS church were the two most important things in his life. He enjoyed spending time with his family and supporting his grandchildren in all they did. He loved giving pep talks to his grandchildren no matter the age. One thing we will all remember from our father and grandfather are the words of council he would humbly share. Talite is preceded in death by his parents, his son Taniela, and his brothers Sione and Saia. He is survived by his wife, children; Peioneti (Laai) Lui, Samipeni (Kelly), Tevita (Niki) Pela, Mark (Stacy), Meliame (Jason) Nydegger, Ana (Jace), Mino (Mekiloni) Kofe, Ruby (Isaiah) Auelua, Siope (Kariana), and grandchildren; PJ, Beto, Adrienne, Leslie, Wyate, Leia, Weylin, Talei, Joeli, Manasa, Talite, Kenya, Morgan, Ongomay, Melina, Benson, Dee, Lolo, Semise, Petisi, Sam, Pamela, Sila and many nieces and nephews. Funeral Services will be held Friday July 3rd at the LDS North Tongan Stake Center 4440 W. 3325 S. West Valley City, UT. Family Program will be from 8-10 AM. Funeral services will follow from 11-12. Burial will take place at the Valley View Cemetery 4335 W. 4100 S. West Valley City, UT at 1PM, under the direction of Peni Malohifo'ou of Serenity Funeral Home. On behalf of Talite we would like to thank all those at Liberty Dialysis Oquirrh Center who provided care to Talite for 4 years and to all his friends he made while receiving dialysis. We would also like to thank the doctors, nurses and staff and Intermountain Medical Center. Talite had many friends from the community and the church that would visit him from and for that we are thankful. Please share memories and condolences at www.serenityfhs.com

The family of Talite Fe'ofo'ofani Lapu'aho created this Life Tributes page to make it easy to share your memories.