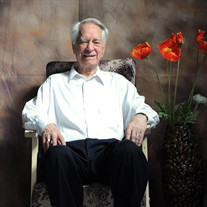 https://us02web.zoom.us/j/83819124385?pwd=U3R1WE1YTVBoQlgydTUzZlJCMGwzQT09 Meeting ID: 838 1912 4385 Passcode: 826837 Talmage Conrad Judd lived a full life of 94 years. He returned home on May 20, 2022. Conrad was born November 27, 1927, in Salt Lake City, Utah to Maud Mary Alexander and Riley Garner Judd. He was the youngest of 8 children. Conrad was drafted right after High School and served in The United States Army. He had a great love for his country. Conrad served a full-time mission in Canada for The Church of Jesus Christ of Latter-Day Saints. Conrad pursued an education at BYU and received his Major in speech and Bachelor in Art. He also received a degree from the U of U for Juris Doctor in 1955. He then practiced as a Federal Prosecutor for 2 years. He practiced law until 2001. After retiring, he enjoyed doing temple work. As he was engaged in temple work a question arose that directed him to China. He found himself going to China in 2003 to teach Chinese Judges about the U.S. Constitution. In 2007 Conrad returned to China to teach English and while there found and married his sweetheart, Yanning Ding, on September 27, 2010, in Xi'an, Shaanxi, China. On February 19, 2011 Conrad baptized Yanning. Conrad and Yanning were later sealed for time and all eternity in the Salt Lake Temple on September 27, 2012. Conrad is survived by his wife Yanning Ding Judd and his children (by first marriage) (son) Kenneth Judd, (son proceeded in death) Kevin Judd, (daughter) Kristin Walker (spouse Robert) (son) Erik Judd (spouse Ashley) 9 grandchildren and 10 great-grandchildren. Many loved nieces and nephews. Proceeded in death by - Parents Maud Mary Alexander and Riley Garner Judd, (Son) - Kevin Judd, (7 Siblings) - Dacy Lora Judd Wolfe, Riley Garner Judd Jr., Austin Bruce Judd, Mary Ardella Judd Scott, Calvin Alexander Judd, Gaylon Keith Judd, Edythe Clarice Judd Noonan. Conrad always remarked what a beautiful and smart sweetheart he has. The way he held her hand and looked at her one knew he loved her deeply. Their marriage was founded on love and support to each other. Conrads's love of the gospel and the love he gave his bride are two passions that have blessed Yanning on this earth and will bless them both in the next life to come. Conrad may you enjoy some softball as you continue with your passion of sharing the gospel. Your sweet bride will continue to fulfill those goals you each set here and hold dear to the love you share. Viewing and Funeral Services will be held on Thursday, May 26, 2022. The Church of Jesus Christ of Latter-Day Saints 6364 South 3200 West Viewing 10:00am Funeral 11:00 am Burial at Utah Veterans Cemetery & Memorial Park 17111 South 1700 West (Redwood Road) Bluffdale, UT 84065