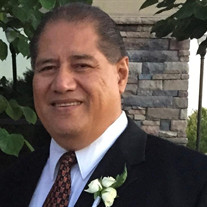 TAVITA OFA FAAMAUSILI age 59 Passed away peacefully on July 14th 2018 in his home in West Valley City, Utah. He was born to Goodly parents; Mele Letua and Ofaatu Misafaleomalietoa Faamausili on May 15th 1959 in Nua, American Samoa. He later moved to the United States. He graduated from Santiago High School in Orange County, California. Served an honorable full-time LDS mission in the #1 Auckland, New Zealand Mission. Soon after he returned home he met the love of his life, Meleane Tilesa Su'a and married her in Los Angeles, California on August 3rd 1985 for time and all eternity. They have 6 kids and presently have 4 daughters in-law and 15 grandchildren. Tavita will be remembered for the love he freely gave, his genuine kindness, his loving sense of humor, but most importantly for his unwavering faith and testimony in and of his Savior, Jesus Christ. He provided much, he sacrificed much, he was a man of patience and humility. He was literally the best Dad anyone could ever ask for. He had the biggest heart for anyone and everyone who came into his life. My Dad lived for his 15 grandchildren, raised his kids to be loving, honest, hardworking, humble and especially to stay close to the Lord. He loved his sweet hunny of 33 years and always enjoyed taking her on dates when he could. He never ceased to remind his kids, grandkids, and his siblings how much he loved them. He was a man who loved God and knew that Families are forever. A man who did his best in consecrating all his efforts in serving the Lord. He was a true Disciple of Jesus Christ. Dad, you will never be forgotten though you will be missed greatly by so many we know that God has a plan, a happy one. We know that we will see you again. So loved are you, so loved by many. Alofa Tele Dad. He is survived by his wife Meleane Faamausili and 6 kids Michael Duane Faamausili (Veisinia) Ofaatu Matthew Faamausili (Christine) Joseph Tafaoimalo Faamausili (Shauntalei) Faamisiona Maina Faamausili (Cecilia) Kelsey Trina Faamausili, and Jonas Hyrum Tavita Faamausili. 7 grandsons; Terrince, Michael Jr, Olomalu, Niko, Tevita, Faamisiona, Asipeli. 8 granddaughters; Meleane, Malinga, Kelsey, Florence, Josel, Sofia, Everly, and Lorinalei. Also 4 of 6 siblings: Faamisiona Faamausili, Kueni Faamausili, Tupou Tauta, and Myla Faamausili. He is Proceeded in Death by his Parents Mele Letua & Ofaatu Faamausili, his brother Wayne Faamausili and just days after my Fathers passing his little sister passed away also; Maina Faamausili. Services are under the direction of Peni Malohifo'ou of Serenity Funeral Home Funeral services will go as follows: Saturday July 28, 2018 Hunter Stake Center 3737 S 5600 W West Valley City, Utah 84120 Viewing: 8:30AM - 9:45AM Family Service: 10:00AM - 11:30AM Bishops Service: 12:00PM - 1:00PM Burial to follow immediately after Bishops Service at the Redwood Memorial 6500 S Redwood Road Salt Lake City, Utah 84123 Luncheon provided by his Family after the burial at the Hunter Stake Center 3737 S 5600 W West Valley City, Utah 84120

TAVITA OFA FAAMAUSILI age 59 Passed away peacefully on July 14th 2018 in his home in West Valley City, Utah. He was born to Goodly parents; Mele Letua and Ofaatu Misafaleomalietoa Faamausili on May 15th 1959 in Nua, American Samoa. He later... View Obituary & Service Information

The family of Tavita Ofa Faamausili created this Life Tributes page to make it easy to share your memories.

Passed away peacefully on July...