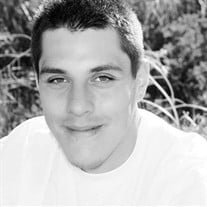 On August 14, 2019, Taylor Jonathan Kauvaka, loving son and father of two children, passed away at age 31. Taylor was born on August 1, 1988 in Salt Lake City, UT to Sitaleki and Rachelle Kauvaka. Taylor enjoyed many things, including drawing and writing. He was passionate about music and was recognized for having a wide variety of playlists as well as the best dance moves. Taylor was known for his sense of humor, his infectious smile, and his kind heart. He could walk into any room and have everyone laughing. Taylor adored his two sons and spending time with his family and friends. Taylor was preceded in death by his Grandpa, Sione Kauvaka and Grandmas, Lesieli Katoa and Melipa Kauvaka. He is survived by his father, Sitaleki, mother, Rachelle, siblings: Chelsie, Kristina, Lesieli, and Salina, children: Kayden and AJ, and many cousins, nieces and nephews. A funeral service will be held on Saturday August 24th, 2019 at the Bountiful 20th ward Stake Center (1250 South Main Street, Bountiful, UT 84010). Services will begin at 9 AM followed by the burial at Bountiful Cemetery (2224 South 200 West, Bountiful, UT 84010).

The family of Taylor Jonathan Kauvaka created this Life Tributes page to make it easy to share your memories.