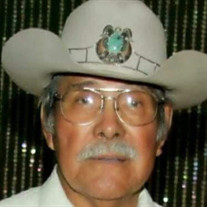 Telesforo (Talley) Frutoso Garcia, 86, passed away on Monday November 30, 2020. He fought a valiant fight against this virus, but he chose to go be with his beautiful wife and our Lord in the Heavens. What a heavenly reunion he had as he was greeted by those who’ve passed before him. He was born June 8th, 1934 in Lagarita Colorado to parents Roman Garcia and Josephita Trujillo Garcia. Telesforo (Talley) met the love of his life Esther P. Garcia (Martinez) in the Meadow Ranch in Center, Colorado. They were married in January of 1956 and spent an amazing 64 loving years together. They then moved to Superior Wyoming where they lived there for a few years, then moved to Utah where they lived the remainder of their years. Together they built a home and everyone at any time was welcome there. The door was always open and you always felt at home and at peace when you were there. Telesforo (Talley) was an amazing man, a caring and gentle man, and he built a wonderful life. He married the love of his life Esther, raised a strong family and they went on to give him many grandchildren, great-grandchildren and great-great-grandchildren. He was an avid hunter. He went on many hunting and fishing trips and he was so good at it. He loved to create and build things. His craftsmanship and attention to detail was extraordinary. He was a carpenter by heart. His hobbies were to build with wood, iron, steel, or to create the most beautiful pieces of jewelry He also had some of the sharpest knives and enjoyed keeping them sharp. His talents continued on in music. He could play the guitar and he could sing. When he pulled out all of the equipment to play, we all pulled out anything we had to record him. These memories will be cherished forever. He had the gift of story telling, he could reel you in the second he started talking about anything. He told exciting stories, he was a history buff and could tell you anything from history including the dates. He was the Sheriff of the town in Superior Wyoming, which reminds me of his love for his westerns that he watched every single day. He would even sit so peacefully in his chair, in deep thought listening to his “AM” radio stations that played nothing but your good ole’ country music. He was a special man, he loved each one of his kids with his whole heart. He’s always wanted the very best for them and for his grandkids. He was known to give out nicknames to each and every grandchild. I believe each one of them love their nickname more than their real names since Grandpa gave it to them. Telesforo (Talley) is survived by his Brothers Arturo Garcia and Don Garcia, Sisters Marcela Salazar, and Mabel Garcia, His children Christine (Tony) Garcia, Talley (Judy) Garcia, Michelle (Adolfo) Flores, Ralph (Jordan) Garcia, Juanita (Mike) Renteria, Jeanene (Larry) Buhler. He was blessed to have 27 grandchildren, 17 great grandchildren and 6 great- great grandchildren. He is preceded in death by: HIs wife Esther P. Garcia, their son’s Kenneth Garcia, Dick Garcia, Larry Garcia, William Garcia, daughter Connie Garcia and two grandchildren: Amos J. Pacheco and Alejandro S. Renteria Services will be held Tuesday December 8th 2020 at Our Lady of Guadalupe Catholic Church. Due to Covid-19 there will be a viewing for immediate Family, from 12:30pm to 1:00pm. Following the viewing there will be a Mass for the Family at 1:00pm.

Telesforo (Talley) Frutoso Garcia, 86, passed away on Monday November 30, 2020. He fought a valiant fight against this virus, but he chose to go be with his beautiful wife and our Lord in the Heavens. What a heavenly reunion he had as he was... View Obituary & Service Information

The family of Telesforo F. Garcia created this Life Tributes page to make it easy to share your memories.