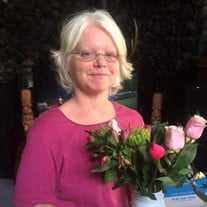 Teresa Diane Jacques, 61, passed away on March 8, 2021 in Ogden, UT. She was born March 31, 1959 in Elk City, Oklahoma to Leaman James Vincent and Bertha Alvira Vincent. Diane spent many of her younger years in Oklahoma playing games with her four siblings before moving with her family through Las Vegas, NV; Fresno, CA; Abilene, TX; and finally settling in Irving, TX where she graduated from MacArthur High School in 1978. After attending many services, Diane was baptized a member of the Church of Jesus Christ of Latter-day Saints at the age of 18 and continued on to be a lifelong member. Having attended JROTC during high school, Diane made the decision to join the Air Force in June of 1980 and served for 3 years. She married in 1983 while living in Alabama towards the end of her service and had 3 children who helped her work in the garden and raise chickens. She remarried in 1993 and had 3 more children, with whom she fostered her love for puzzles and country music. Diane lived many different places from then on, including time in Phoenix, AZ and Shreveport, LA. In 2017, amid health concerns, she moved to Utah to reside near her younger children where she lived until she passed. She was a lover of the band Rascal Flatts, shepherd’s pie, actor Antonio Banderas, family history, her fellow veterans, and the gospel of Jesus Christ. Survived by: mother, Bertha Alvira Vincent; sisters, Trudy Colton, Trisha Bell, Tabitha Hutchison; brother, Terry Vincent; children, Leabeth Occhipinti, Christina Smoke, Robert Smoke, Amy Rupp, Alyssa Fletcher, Briana Butcher; 9 grandchildren; 4 step-grandchildren Preceded in death by: father, Leaman James Vincent; granddaughter, Chloe Jayne Smoke Diane will be buried in the Utah Veteran’s Cemetery & Memorial Park, 17111 S 1700 W, Bluffdale, UT 84065 on Monday, March 15, 2021. A viewing and funeral service will be held at the cemetery chapel. Viewing (immediate family only) will be held from 9-9:30AM. The service will begin at 10AM, and is open to all family and friends who wish to attend. The burial will follow at 11AM, followed by a luncheon at 12PM at the LDS Chapel located at 891 W 130 N Orem, UT 84057 for those who wish to give their condolences to the family and celebrate Diane’s life and service to our country. We would like to publicly thank Serenity Funeral Home for their respectful care of our mother following her passing, as well as Veteran’s Affairs for doing their best over the years to help our mother get the help she needed and providing assistance for her burial. We would also like to give a huge thank you to all who donated funds to help cover the funeral and burial costs—we are forever grateful. Additionally, we would like to thank members of the Suncrest 1st Ward, Suncrest Stake, Orem, UT for providing the luncheon following the service as well as members of the Paradise Acres Ward, Rock Cliff Stake, Ogden, UT for ministering to and serving Diane in the last few years of her life.

Teresa Diane Jacques, 61, passed away on March 8, 2021 in Ogden, UT. She was born March 31, 1959 in Elk City, Oklahoma to Leaman James Vincent and Bertha Alvira Vincent. Diane spent many of her younger years in Oklahoma playing games with her... View Obituary & Service Information

The family of Teresa Diane Jacques created this Life Tributes page to make it easy to share your memories.