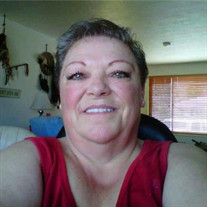 Terri Korrin McAllister Hincks, 65, passed away November 1, 2021 after a long illness. Terri was born to William Quinn and Alta Rae Smith McAllister Hansen on May 31, 1956 in Panguitch, Utah. She is the baby sister to Olga and Bill. She married Valdee Hincks, July 21, 1997. Terri attended Panguitch Elementary School. From the first day of school Terri and Linda Henrie (Thomas) became closest, sister like friends. That friendship continued for her lifetime. In August 1969, Terri, her mother, stepfather and brother Bill, moved from the rural country to the Salt Lake City. Terri attended Churchhill Jr. High and Skyline High School, graduated in 1974. While at Skyline she met Lori, Peggy, Pam (deceased), Collette and Richard, who later became lifelong friends. They have continued their close friendship up until Terri’s passing. Terri worked for the 7-11 Corporation for many years. While working there a coworker introduced her to her father who became Terri’s husband. Terri is survived by her sister Olga Anderson, brother William (Shauna) McAllister, stepdaughter Barbie (Robert) Brown, grandson Garrett Brown and several nephews and nieces whom she loved dearly. BFF’s: Linda Thomas, Lori Aldous, Peggy Carson, Collette Faust, Richard Frewin and many more relatives and friends. She is preceded in death by her husband, parents, stepfather, Vaughn Hansen, brother-in-law, Eugene Anderson and nephew, Justin Anderson. The family and friends would like to thank Chesley McAllister, Quinn McAllister and Antwan Williams for all you have done in taking such special care of Terri. Words cannot express how grateful we are for your loving commitment. A Celebration of Life will be held on Saturday, November 13, 2021 between 12:00 p.m. and 1:00 p.m. at the Midvale Seventh Ward, 8350 Jackson Street, Midvale, Utah where friends may come and share our memories of Terri. Burial will be on November 20, 2021 at the Panguitch City Cemetery, Panguitch, Utah. Terri was the kindest, most loving person you could ever know. She would do anything to help you. RIP our friend, you will truly be missed.

Terri Korrin McAllister Hincks, 65, passed away November 1, 2021 after a long illness. Terri was born to William Quinn and Alta Rae Smith McAllister Hansen on May 31, 1956 in Panguitch, Utah. She is the baby sister to Olga and Bill. She married... View Obituary & Service Information

The family of Terri Korinn McAllister Hincks created this Life Tributes page to make it easy to share your memories.