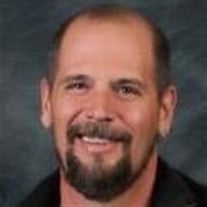 Terry Edward Moser Jr. 1969 ~ 2016 Our brave, strong and hard-working Son, Husband, Daddy, Papa, Brother, Grandson, Nephew, Uncle and Friend Terry, age 46 was born August 31, 1969 in Salt Lake City, Utah and passed away at his home on March 26, 2016 following a swift battle with cancer. He was an honest man and worked hard to provide for his family. He loved his Mama and his girls, fiercely! He enjoyed his time in the mountains hunting, fishing and camping. He wasour “Go to” guy and had an expansive knowledge of many things. He was looking forward to many years as Papa and teaching the little ones. He was a good example to his children and others, he was proud of the three years sobriety he had achieved before his cancer diagnosis. “Life isn’t fair, suck it up.” he would say. He was fun-loving with a great laugh and an even better smile. Terry is survived by his wife of 26 years, Teri and their daughters, Linda (Steven) and Tanya (Fedencio); grandson Ethan and new grand baby due this fall; Mother MaryAnn, Father Darwin, Sister Tasha (Steve), Brother Troy, Grandparents DuWayne and Mary, many aunts, uncles, nieces, nephews, cousins, friends and close friend Nee’. Preceded in death by Father Terry Sr.; Brother Trevor, Grandparents Jerry & Mae and Father-in-law Mike. Terry has requested no services and in lieu of flowers the family would love your stories and memories for a remembrance book for his grandchildren. Please share memories and condolences at www.serentiyfhs.com

The family of Terry Edward Moser created this Life Tributes page to make it easy to share your memories.

Our brave, strong and hard-working...