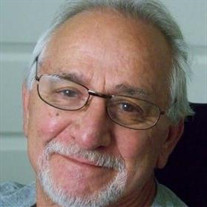 Theodore G Martinez (Ted) June 1st, 1943 - December 31st, 2015 Age 72 Our Dad passed away peacefully in his home after a courageous battle with cancer. Born in Pueblo, Colorado, he was son of the late Elias and Faye Martinez, He graduated Central High in 1961 and served in the United States Navy. He was a wonderful Son, Brother, Father, Grandfather, Uncle, Nephew, Cousin and Friend. Survived by his two sons, Ted Martinez and his wife Arlene, Tim Martinez, and their brother Tom (Dee) Lavine, and the mother of his sons, Bernadette Gomez. His two daughters, Charity Smith and her husband Schuler Olsen, Candyce Smith, and their brother Weston Smith and his wife Tatiana Smith, and the mother of his daughters, Karla Smith. Survived by his brother Elias Jr. Martinez and his wife Gloria Martinez, his sister Clara Martinez Chase and her husband Lynn, and his uncle Tino Jose Griego. Survivors also include his grandchildren, Chantelle Bouldin, Dallas Jensen, Chance Ponciroli, Jachob Jensen, Saydee Ponciroli, Aubrey Olsen, two great-grandchildren, and numerous aunts, uncles, cousins, nieces and nephews. Proceeded in death by his parents, Elias and Faye Martinez, his sister, Elioda Vigil and her husband Joe Vigil, his sister Betty Maes, and his brothers Victor Martinez and Ned Martinez, his nephews Douglas Chase and Patrick John Vigil, and two great grandchildren. Our dad loved to spoil all the kids, even if they weren't his own children, because to dad each of them were his family and each held a special place in his heart. We all enjoyed the oldies music he played on his acoustic guitar and his famous cooking with honorable mention to his chili verde & homemade tortillas. Dad was a loving man who taught us all how to be truly selfless. We will always love him and forever cherish the infinite memories he left behind with permanent imprint on each of our hearts. There will be two services held Salt Lake City, Utah Date: Friday, January 8th 2016 Time: 7:00 PM - 8:00 PM Place: The Safety Consortium 400 West Lawndale Drive (2500 South) SLC Utah Please do not send flowers to the above address Pueblo, Colorado Date: Saturday, January 16, 2016 Time: 11 am - Funeral Mass with interment to follow at Imperial Gardens Further information will be available in the Pueblo Chieftain Please share memories and condolences at www.serenityfhs.com If you’d like to send flowers please contact Candyce Smith (801) 671-9303 in Utah or Tim Martinez (719) 565-9151 in Colorado.

Theodore G Martinez (Ted) June 1st, 1943 - December 31st, 2015 Age 72 Our Dad passed away peacefully in his home after a courageous battle with cancer. Born in Pueblo, Colorado, he was son of the late Elias and Faye Martinez, He graduated... View Obituary & Service Information

The family of Theodore G. Martinez created this Life Tributes page to make it easy to share your memories.