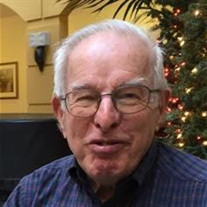 Thomas Richard Gould, aged 92, passed away on May 6, 2017 in Salt Lake City, Utah. He was born February 5, 1925 in Wichita Falls, Texas to John and Delia Gould. He married Mary Emma Sowter on May 23, 1953 in Ridgewood, New Jersey. He is survived by his children- Barbara Miller of Atascadero, California, Priscilla Roberts (Ken) of Tucson, Arizona, John Gould (Leslie) of Midland, Texas, MarySue Howisey (Chuck) of Salt Lake City, Utah and Tom Gould (Shari) of Colorado Springs, Colorado; 13 grandchildren and nine great grandchildren. Tom grew up in Wichita Falls, Texas and graduated from Wichita Falls High School in 1942. He attended Texas A&M until he was commissioned in the U.S. Navy in 1944 through the V-12 program. Tom served on the East Coast and in Panama during WWII. Following the end of the war he returned to Texas A&M where he graduated in 1946. Tom worked as an engineer for Johns-Manville Corporation for 33 years, then had an active retirement, working as a consultant, as a salesman at Ace Hardware and as a part-time employee of the Federal Emergency Management Agency. He and Mary also worked several seasons at Yellowstone National Park. Tom and Mary lived in Martinsville, New Jersey until 1972 when they moved their family to Littleton, Colorado. Except for a one year stint in Sao Paulo, Brazil, they remained in Littleton until 1995, when they retired to Tucson, Arizona. They moved to Salt Lake City in 2012. Tom was a proud and active member of the Episcopal Church and faithfully attended Church of the Resurrection in Centerville, Utah until his health began to fail. He was a man of great humor, who impressed everyone he met with his pleasant demeanor and kindness. He will be deeply missed. A Celebration of Life will be held at Church of the Resurrection on July 8, 2017. In lieu of flowers, donations in Tom’s memory may be made to Church of the Resurrection, 1131 S. Main St., Centerville, Utah 84014.

Thomas Richard Gould, aged 92, passed away on May 6, 2017 in Salt Lake City, Utah. He was born February 5, 1925 in Wichita Falls, Texas to John and Delia Gould. He married Mary Emma Sowter on May 23, 1953 in Ridgewood, New Jersey. He is survived... View Obituary & Service Information

The family of Thomas Richard Gould created this Life Tributes page to make it easy to share your memories.