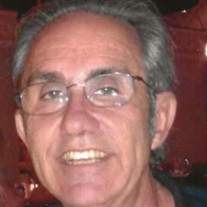 With the sound of fireworks in the distance, Thomas Edward Roberts, 69, passed peacefully from this earth on the evening of December 31, 2020, in Salt Lake City, UT. Tom was born August 24, 1951 in Lynwood, CA to Arnold Edward Roberts and Olga Schwindt Roberts. The first born of three sons, he grew up in South Gate, CA, playing baseball and basketball. Basketball became his life passion and Tom followed in his mother’s footsteps as a loyal fan of the LA Lakers. Working his way through college at Firestone Tire and Rubber Co, a landmark in South Gate, Tom graduated from California State University at Los Angeles with a Bachelor of Science degree in accounting. He began his accounting career with Firestone before moving on to AiResearch (Garrett), which later, through acquisitions, became Honeywell Aviation in Torrance, CA. At the time of his retirement, Tom was the Controller with GKN, another aerospace company based in El Cajon, CA. Tom possessed an incredible work ethic he modeled from his father. He excelled in his lead role in project accounting for the electronic controls and cabin pressure product lines. With a special expertise in setting up business and IT systems, Tom was instrumental in another Honeywell startup division. But what was most important to Tom, was his family. Regardless of the demands and travels of his professional life, he managed to always be there for his sons’ sports activities. Most of the time, he coached the boys’ baseball and basketball teams, leading often to league championships. Family times revolved around competitive sports. Tom is survived by his wife, Nancy Patton Roberts, of Carlsbad, CA, his son Jeffrey, of Billings, MT, his son Michael (Desiree) of Long Beach, CA, his brother James (Lynette) of Fountain Hills, AZ, his former wife, Nadine Roberts of Sequim, WA, nephews Justin (Faith) Roberts, Jared Roberts and niece, Leah Roberts. Tom is preceded in death by his parents and his brother Kenneth. The family would like to give special thanks to his devoted care team at The Auberge at Aspen Park (Formerly Silverado), Charles Fehlauer MD, and Silverado Hospice. Family and friends are invited to celebrate Tom’s life in a socially distanced, outdoor setting in San Diego, CA, on April 24, 2021. For details, please contact Nancy, [email protected]

With the sound of fireworks in the distance, Thomas Edward Roberts, 69, passed peacefully from this earth on the evening of December 31, 2020, in Salt Lake City, UT. Tom was born August 24, 1951 in Lynwood, CA to Arnold Edward Roberts and... View Obituary & Service Information

The family of Thomas E Roberts created this Life Tributes page to make it easy to share your memories.

With the sound of fireworks in the distance, Thomas Edward Roberts,...