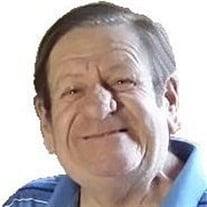 Thomas Alan Turner,age 68, passed away February 2, 2020, in Provo, Utah. Tom was born May 10, 1951, in Salt lake City, the son of Norval George Turner and Beatrice Mary Howells. Tom lived his early life in Murray Utah and graduated from Murray High School. He served a mission for the Church of Jesus Christ of Latter-Day Saints in England and Wales. He attended LDS Business College and Utah Valley Community College. He married Cathy Sommers in 1980 and moved to Provo, Utah. They have 1 daughter, Melinda Ann(Mindy) Turner. Two other children were waiting on the other side for him. Tom was a spittle-flying, rabid, BYU football fanatic to the point that he never missed a single home football game. Even the day his newborn daughter came home from the hospital, he made it for the second half. After a few years on dialysis, he finally didn't have the strength to go but settled on watching it on TV. He served in many callings for the Church: ward basketball coach, Sunday School president, executive secretary for 2 bishops, stake missionary, care center coordinator, nursery leader, librarian and especially as a temple worker in both the Provo and the Provo City Center Temples until his health failed. Wherever he went, he made new friends and found distant family connections with them that no one suspected. We believe his daily motto was "Make 5 new friends every day!" Tom was an avid fisherman and the only things that stood in the way of fishing were his health and BYU sports. Tom was preceeded in death by his parents and an infant sister, Jeanine. He is survived by his wife Cathy, daughter Mindy, sister Sherrie(Andy) Sommers, brothers Bill(Jaylene) Turner and Jay(Wendy) Turner, many nieces and nephews, and cousins by the dozens! A memorial service will be held on Saturday, February 8, 2020, at 2 PM at the Freedom Chapel at 888 South Freedom Boulevard, Provo, Utah. Desserts will be served afterwards in memory of his infamous sweet tooth.

The family of Thomas Alan Turner created this Life Tributes page to make it easy to share your memories.