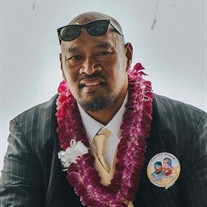 On the morning of June 12, 2018 at 8:47am Toeupu Logologo Jr., took his last breath with his family surrounded by his bedside at Jordan Valley Medical Center, in West Valley City UT. He was born in Utulei Hospital in American Samoa, to Toeupu Logologo Sr. and Toetu Afemata. He had a beautiful wife Anna Diane Logologo that he was married to for 34 years. They were sealed for all time and eternity on June 17, 1995 at the Los Angeles, LDS Temple. Majority of his life he was always thinking of what to eat next lol. He loved to eat and try new restaurants. He also loved to go to the gym, he swore he was a personal trainer. He would get so excited when he learned something new and tried to have his kids do it with him. He was such a giving man and always thought of others before himself. He had a hard time saying no to anyone. He was also a very talkative man, he could make friends with anyone that came anywhere near him and would start telling his life story to them lol. Toeupu survived by his 4 kids Toeupu Logologo III, Ashleigh/Alfred Lealiee, Alyssa/Faleupolu Tuiatua, Alivia Logologo, Rosie Pito and Sekai Afemata. HIs grandbabies Ellanie, Kaylie and Joey Logologo, Arianna and baby Faleupolu Tuiatua, Malosi and Evangeline Lealiiee. His siblings Moana/Melinda Logologo, Situi/Wesely Pele, Jacob/Shelly Logologo and Ricky/Janice Logologo. He is preceded in Death by his Parents Toeupu Logologo Sr & Toetu Logologo, wife Anna Diane Logologo and Son Va'a Jonathan Glen Logologo. The service will be held on Monday, June 25, 2018 at 8:30am (PLEASE BE ON TIME). Copperhill 8th Ward 4195 South 6000 West West Valley City, UT 84128-6508 Family Service 8:30am-11am Viewing Bishop Service 12pm-1pm Burial at Crescent Cemetery 11105 State Street Sandy, UT 84070 Services are under the direction of Peni Malohifo'ou of Serenity Funeral Home Our family would just like to thank everyone who was there with us during his final hours and the one that contacted us and who haven't left our side since. I'm sure he was smiling down, seeing how loved he was. Also a big shout out to the ICU department at Jordan Valley, for caring and doing your best. I wish I knew the nurses name that was watching him, but thank you for going above and beyond to make sure he was comfortable and always updating us for every little thing. Please share memories and condolences at Serenity Funeral Home

On the morning of June 12, 2018 at 8:47am Toeupu Logologo Jr., took his last breath with his family surrounded by his bedside at Jordan Valley Medical Center, in West Valley City UT. He was born in Utulei Hospital in American Samoa, to Toeupu... View Obituary & Service Information

The family of Toeupu Logologo Jr created this Life Tributes page to make it easy to share your memories.