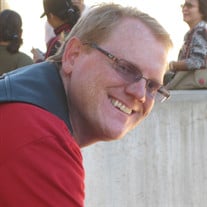 Travis Nephi Ferguson, 49, passed away on June 5, 2015. He was born on February 19, 1966 in Provo, UT to Hal and Carma Ferguson. On May 6, 1989, he married Kelly Leigh Chapman in Jackson, Wyoming. The marriage was later solemnized in the Salt Lake City Temple on November 27, 1993. Travis is the 10th of 14 siblings and grew up in the small farming town of Hibbard, ID, a suburb of Rexburg, ID. He attended Madison High School where he graduated with the Class of 1984. He attended Ricks College, then Brigham Young University, where he graduated with an Electronics Engineering Technology degree in 1998. Travis joined Data Transit, a hardware engineering company in San Jose, California. Travis made great contributions and built a strong friendship with the owner of Data Transit. When the company was sold, he was chosen to be a part of the new founding team of SerialTek where he continued his work and passion as a hardware engineer. He had the privilege of working on many significant projects where his work was written about in articles and trade journals. Travis loved riding his Harley Davidson motorcycle with his wife, family and friends and took the opportunity to get away on bike trips whenever he could. Travis had a unique sense of humor and quick wit that could make everyone laugh and feel comfortable. Travis is survived by his wife, Kelly; children, Summer (Mark), Nicholas (Heather), Corey, McKayla, Sabrina and Isaac; grandchildren, Tegan, Bridger, Adley, Madeline and Ezra; parents, Hal and Carma; siblings, Georgann (Scott), Phil (Carolyn), Scott (Julie), Mike (Renae), Barbara, Becky (Sid), (Gracie), Mark (Dalene), Rob (Alison), Sandy (Tecia), Melissa (Kevin), Nichole (Jeff), and Richard (KaraLyn); and many nieces and nephews. He was preceded in death by his brother McKay. Funeral services will be held on Wednesday, June 10th at the LDS Lehi 46th Ward Chapel at 851 North 1200 East, Lehi, UT at 11:00am, preceded by a visitation from 9:30 to 10:30am. Interment: Sugar City Cemetery in Sugar City, Idaho. A Last Ride to the Sugar City Cemetery will be held on Thursday, June 11, 2015 in honor of Travis. For additional information on participating, please call Sandy Ferguson at 208-870-8027. To share condolences to the family go to www.serenityfhs.com

Travis Nephi Ferguson, 49, passed away on June 5, 2015. He was born on February 19, 1966 in Provo, UT to Hal and Carma Ferguson. On May 6, 1989, he married Kelly Leigh Chapman in Jackson, Wyoming. The marriage was later solemnized in the Salt... View Obituary & Service Information

The family of Travis Nephi Ferguson created this Life Tributes page to make it easy to share your memories.