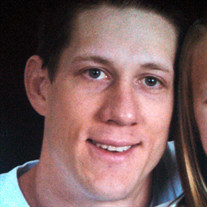 Travis Robert Long was brought home to our Father in Heaven on June 24, 2014, in Salt Lake City, Utah. He was born on May 26, 1980 in Provo, Utah to Ellen Long and Robert Eugene Dillenbeck. He married Krystle Long. They were married for 12 years. He was proceeded in death by his sister Samantha Marie Dillenbeck one year prior on April 19, 2013. Travis was a strong faithful man and brought his family close to Jesus. Two days before he passed he was out at the park handing out bibles. He enjoyed looking up at the sky and being outdoors. He loved his work, which he was a master at, he won 1st place in Utah for HV/AC Skills USA and 6th place in Nationals 2009. He read his HVAC text book cover to cover twice, he was always prompt and on time, and never got call backs on his work. For his neighbors and even perfect strangers he was always willing to drop anything and lend a hand. When entering a room he regularly lit up the room with his smile. We have no doubt that he is still lending a helping hand and bringing smiles to all around him. He enjoyed researching everything he could think of on his smart phone, Travis was full of knowledge and information. He was so smart. He was an amazing teacher which is a trait he passed on to his beautiful daughter. It didn't matter what the question he had an answer, he was always so in tune with this world, and understood many things so well. He was an amazing father to his two beautiful children Aliah McKinley and Luke Dylan Long. Travis had an adventurous life that he shared with the love of his life Krystle Long. He enjoyed spending as much time with his family as possible. He taught his family so much which made us all grow in many ways. Travis touched many lives, his life before he met his wife was so different than most, but he appreciated the lessons Heavenly Father had to offer him. Travis truly enjoyed life, when he was happy it was like he was walking on the sun, just glowing, his kids enjoyed long walks with him, didn't matter how big they were if they wanted to be carried he would carry them, he would offer for his wife if she would have wanted. He enjoyed wrestling around with his kids and nieces and nephews, he loved just holding Aliah and Luke he always wanted to be near them, if he wasn't working he would be home helping Aliah with her homework teaching her how important it is to have an education. Which I don't know where he got this from because he did not grow up that way. Most things came so natural to him. He was always so giving, he took his co-workers on call most weekends, he loved making friends and getting into deep conversations with them that would just open up your mind! There will be a viewing on Monday July 7, 2014 at the LDS Church at 1289 E 300 S from 6-8, and Funeral Services will be held July 8, 2014 at Graveside at the Provo Cemetery at 10 am. To donate to the Long Family Funeral go to www.giveforward.com any donations would be very much appreciated. Special thanks to Serenity Funeral Home of Draper and Orem.

Travis Robert Long was brought home to our Father in Heaven on June 24, 2014, in Salt Lake City, Utah. He was born on May 26, 1980 in Provo, Utah to Ellen Long and Robert Eugene Dillenbeck. He married Krystle Long. They were married for 12... View Obituary & Service Information

The family of Travis Robert Long created this Life Tributes page to make it easy to share your memories.

Travis Robert Long was brought home to our Father in Heaven on...