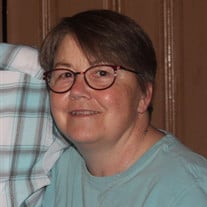 Trudy Ann Pearson, 60, passed away July 18, 2018 at her home in Riverton Utah. Trudy was born May 22, 1958 in San Diego California to Martha Evelyn Dillman, and Wayne Nils Hallstrom. Trudy grew up in Etna California, a small town she very much enjoyed, near to the Oregon border. She later went on to earn her bachelors degree in family relations and child development from Brigham Young University in Provo Utah. Trudy met her husband David Pearson in Chico California while attending Chico State University where she was earning a paralegal degree. She and Dave married in the Oakland California Temple of The Church of Jesus Christ of Latter Day Saints on June 1, 1985. Dave later joined the United States Airforce and they moved to San Antonio Texas. Soon after they were stationed in Berlin, Germany and then RAF Chicksands Air Force Base, UK. After the time abroad they were stationed at Fort Meade Maryland, where most of Dave’s career was spent. Here many friends were made who became more like family. Trudy was a stay at home mom and also worked as an educator while earning her master’s Degree in special education. She used her unique skills and talents to teach and help students as a teacher and reading specialist. Upon leaving Maryland Trudy spent a short amount of time living in Durango Colorado and then on to her home in Riverton Utah, where she enjoyed her time as a grandmother, known to her grandchildren as “GaGa”, spoiling her dogs, reading, gardening, camping, and enjoying her favorite black and white T.V. shows and movies. Trudy is proceeded by parents Martha and Wayne Hallstrom and sister Annette Harris. She is survived by her husband David Pearson, daughters Beth Hermesman (TJ Hermesman) and Anne Fletcher (Jordan Fletcher), grandsons, Kemper and Porter, granddaughter, Amber, and brother Wayne Hallstrom. Services will be held at the Church of Jesus Christ of Latter Day Saints, 12070 South Laurel Chase Drive, Riverton Utah, 84065 at 12:00 pm Wednesday July 25, 2018 with a viewing at 10:00 am prior to the funeral service. Following the funeral service Trudy will be laid to rest at the Utah Veterans Cemetery and Memorial Park in Bluffdale Utah.

Trudy Ann Pearson, 60, passed away July 18, 2018 at her home in Riverton Utah. Trudy was born May 22, 1958 in San Diego California to Martha Evelyn Dillman, and Wayne Nils Hallstrom. Trudy grew up in Etna California, a small town she very much... View Obituary & Service Information

The family of Trudy Ann Pearson created this Life Tributes page to make it easy to share your memories.