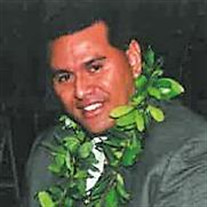 Tu’i Tavana Moimoi, age 51, passed away peacefully late Friday evening, January 27, 2017 after a short battle with liver cancer, surrounded by his family at home in Salt Lake City, UT. Tavana was born on September 19, 1965 in Fanga ‘i Tavana, Tongatapu, Tonga, to Pila & Langihiva Moimoi. He married and was sealed to his wife, Burlingame Vimahi on October 21, 2000 in the Salt Lake Temple and were blessed with two beautiful children. Tavana passionately believed in the importance of education and set the example for his children and family by achieving his Bachelors of Science degree at Weber State University. Tavana was a kind man, and took pride in how well he loved and took care of his family. He emphasized how much he loved his wife and children, cared for their education, and served in all aspects of his church callings. If there was anything Tavana wanted to leave as part of his legacy, it was for his wife and children to know how much he loved them, and wanted them to succeed in life. He spoke often that education would be their freedom. He also worked tirelessly to assure the safety and opportunity for his parents and siblings to enjoy their lives in America. Tavana taught troubled youth the power of education, perseverance, and respect while he served as a counselor at the Utah’s Decker Lake facility. He was surrounded by his colleagues and brothers, Rod Talaeai, Trent Clements, and Fisi Moleni as they worked together to improve the lives of many troubled youth. He loved his co-workers like family, and he treated them as such. He was surrounded by a network of brothers, supporters and community in all which he was involved. He is survived by his wife, Burlingame Vimahi Moimoi, children, Elizabeth Lauren and Pila Hale Percival; mother, ‘Ana Langihiva Fa Saulala from Halaufuli, Vava’u, father, Pila Hale Moimoi from Ha’atafu, Kolomuotu’a, Tongatapu, and siblings Lata he ‘Anga (Kuli), Simote (Mafi), Neil Armstrong, Siaosi (La’ie), and many aunties, uncles, nieces and nephews. Services will be held on Saturday, February 4, 2017. Viewing will be from 8:00 – 11:00 a.m. Service will be from 12:00 – 1:00 p.m. at the Cannon 9th Ward located at 1250 W 1400 S, Salt Lake City, UT. Burial services will be held at Redwood Memorial Estates on 6500 S. Redwood Road, Taylorsville, Utah. The Moimoi family appreciates the care of Tavana’s transition with Serenity Funeral Home under the direction of Peni Malohifo’ou. Please share memories and condolences at www.serenityfhs.com.

The family of Tu'i Tavana Moimoi created this Life Tributes page to make it easy to share your memories.