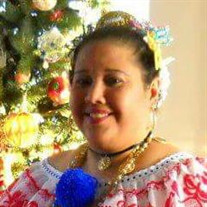 UBALDINA "UBA" ORENGO of Salt Lake City, Utah. UBALDINA was born on February 2, 1953 in Panama Republic de Panama and passed on the evening of APRIL 2, 2016 at University of Utah Hospital. She will be dearly missed by all her friends and family. Her parents Amada Cortés and Gregorio Almendro Cortés. At the age of 18, she along with family moved with her step father, Raymond Parker, to the United States, where she met Carlos Orengo, whom she later married November 3, 1972, then had two children, Jenny and Carlos. She was a vivacious and passionate dancer, who was always the "Life of the party". Uba especially loved her native typical music and attire "The Pollera" which she proudly wore and danced in. She also had a gift and passion to decorate, making Christmas her favorite season of the year. No one decorated their home better than Uba during Christmas inside and out. Uba was very proud of heritage and celebrating her country independence, no matter where she lived. Proverbs 18:24b "There is a friend who sticks closer than a brother" this describes how she was with all her friends and family. Always willing to lend a helping hand, encourage and serve in any way possible. Uba was always there for everyone she knew. Uba loved the Lord with all her heart and was passionate about her faith, with which she impacted many people, especially when things seemed the worst for her. She will be remembered by the phrase, "My life is in the Lords and Hands". Ubaldina was preceded in death by: her father and stepfather, Gregorio Almendro Cortés and Raymond Parker respectively, and brother, John Borden. Ubaldina is survived by: her Husband, Carlos Orengo, Daughter Jenny Orengo de Courtney, Son Carlos Orengo, Grandchildren Christoper, CJ, Bella and Kayla, her mother, Amada Parker, Sisters, Amalia Chen, Sissy Aizpurua, Edixa Collazoand Denise Larson,and Brother Roy Parker. In lieu of flowers, memorial donations may be made sent to GoFundMe.com/UBA-FUNERAL. Condolences may be left on online at serenityfhs.com and www.Never-Gone.com/Memorials/Uba. Funeral & Viewing service by Serenity Funeral Services will be held on Friday,15th of April at: The Church of Jesus Christ of Later Saints 5938 West 6200 South Salt Lake City, UT Viewing @ 10:30 am, Funeral @ 12:00 pm Burial @ Sandy Crescent Cemetery 11105 South State Street Sandy, UT @ 130 pm. Our family would like to extend our gratitude to everyone that has support in her final days.

UBALDINA "UBA" ORENGO of Salt Lake City, Utah. UBALDINA was born on February 2, 1953 in Panama Republic de Panama and passed on the evening of APRIL 2, 2016 at University of Utah Hospital. She will be dearly missed by all her friends and family.... View Obituary & Service Information

The family of Ubaldina Orengo created this Life Tributes page to make it easy to share your memories.