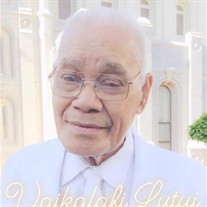 Vaikalafi Lutui’s mortal journey came to a harmonious conclusion as he returned home to our Heavenly Father on November 13, 2018 in his Salt Lake City, Utah home with his family by his side. He was born on July 11, 1931 in Matahau, Tonga to his loving parents Samisoni and Finau Vaivela Lutui. He married his Eternal Companion Mele Kafoatu Tafuna on July 2, 1959 in Tonga and they were later sealed in the Hamilton, New Zealand Temple on June 16, 1962. Vaikalafi & his precious wife, Mele together had 11 children, who he was survived by which includes, Samisoni (Sune Vehikite), Edith (Uaine Fa), Whitikei (Siutiti Mahina), Mele Kafo’atu (Avalisi Bloomfield), Lusa (Mohulamu Kivalu), Melini (Tipasa Tukuafu), Neomai (Siliveinusi Niu), Vaikalafi Jr(Ilaisa’ane Vimahi), Tuipulotu (Saia Langi), Isikeli (Alexandrina Hopoate), Seisela (Sione Koloamatangi), 66 grandchildren, and 48 great grandchildren. He loved his family and devoted his entire life to them. Vaikalafi was unique in that he came from very humble circumstances as his parents passed away while at a very young & tender age. Vaikalafi had very little education but was a humble & teachable person who went on to serve in many callings for The Church of Jesus Christ of Latter Day Saints. He had the priviledge to serve as a labor missionary in the building of the Polynesian Cultural Center, PCC in Hawaii for a year & a half. His dear wife & oldest son, Samisoni were not able to join him in Hawaii so he had to return back to Tonga. He was called again to serve in the Hamilton, NZ Temple as a labor missionary couple and was then able to seal his family for time and all eternity. Three of his children were born in New Zealand, Edith, Whitikei Brown and Mele Kafo’atu (RIP). After returning home from New Zealand they had the rest of their 7 children. Vaikalafi and his wife later migrated to the United States of America where they lived until they were finally called to their celestial home. In Vaikalafi’s own words “Of all the callings that I’ve done in my life and in the Church of Jesus Christ of Latter day Saints my most joyous calling was my role as a Father to my 11 kids & husband to my beloved wife.” Vaikalafi served faithfully as a bishop, stake president, regional representative (now Area Seventy) counselor to the Tonga Temple president, stake patriarch and also a temple sealer. The work he was able to perform with his two hands truly transcended time & will go forth through eternity. He dedicated his life to serving the Lord with all his might, mind, and strength & did so without hesitation. He was a simple man and his greatest joy was when his children and grandchildren were living the teachings of the gospel. He left a legacy of hard work, dedication to his family, an undying love for Heavenly Father and His Son, Jesus Christ which was evident in the love he showed towards anyone who he crossed paths with. He was a man of unwavering faith and ministering was a definite lifestyle of his. He will be missed by his family and friends who find true comfort in the reunion he will have with his parents, eternal companion Mele Kafo’atu and his daughter Papa. Services are under the direction of Peni Malohifo'ou of Serenity Funeral Home. Funeral service will be on Sunday November 18th at the Cannon Stake Center 934 Fremont Avenue, SLC, Utah 84104 from 6pm to 10pm and the bishop’s program will be at 12p at the same location. His burial will be at the Salt Lake City Cemetery at 2pm.

Vaikalafi Lutui&#8217;s mortal journey came to a harmonious conclusion as he returned home to our Heavenly Father on November 13, 2018 in his Salt Lake City, Utah home with his family by his side. He was born on July 11, 1931 in Matahau, Tonga... View Obituary & Service Information

The family of Vaikalafi Lutui created this Life Tributes page to make it easy to share your memories.