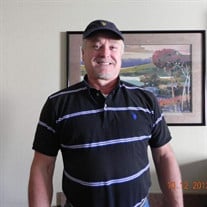 VAUGHN HUGHES OBITUARY Vaughn Ray Hughes, 65, passed away March 30, 2016 at the Huntsman Cancer Center in Salt Lake City from complications associated with Glioblastoma Mulitforme (GBM) brain cancer. Vaughn was born July 25, 1950 at Cottonwood Maternity Hospital in Murray, Utah. He was the youngest of nine children born to Harold William Hughes and Cleone Harris Hughes. Vaughn lived most of his life in Sandy, Utah. In 1998, he bought and lived in the home in which he was raised. Vaughn graduated from Jordan High School in 1968 and married his high school sweetheart, Letty Gay Green shortly thereafter on August 9, 1968. They had two children. Later divorced. Vaughn then married Glenda Gurr in 1984. He adopted three of her children and they had three more children together. Later divorced. He finally married Anna Shirshova of Nizhniy, Russia in 2004. Later divorced. (We’ll give him a mulligan on that one.) Vaughn served in the U.S. Army Reserve for six years. He graduated from the University of Utah with a bachelor’s of science degree in Mining Engineering and earned his professional engineering license (P.E.). He enjoyed careers in mining, oil, and gas with Utah Power & Light, International Petroleum, and U.S. Bureau of Land Management, from which he retired earlier this year. He also dabbled in various ventures of his own over the years that took him far and wide. Vaughn was a hard worker who dreamed big. He was an adventurous soul with a lifelong fondness for nature, animals, and travel. His travels included Alaska, Hawaii, Korea, Europe, United Arab Emirates, Russia and his Winkeye Mine in the Sierra mountains of Northern California. Vaughn was an elder in the Church of Jesus Christ of Latter Day Saints. He was sealed to his parents on February 2, 2016. Vaughn loved all eight of his children and despite many obstacles, not all of his own making, sought to do his best to be a good father through good times and bad. His final and most fervent wish was for them to know how much he loved them. Vaughn is survived by his eight children: Casey Hughes (Amie); Jamie Hughes Mackintosh (Chris); Jeremiah Hughes (Karalee); Derrick Hughes (Breanne); Brandon Hughes; Dustin Hughes (Lauren); Kimberly Hughes Cline (Matt); Jared Hughes. His grandchildren are Hudson Hughes, Allyson Urry, Presley Ventrello, Maddox Macintosh, Graysen Hughes, Ellie Hughes, Zoey Hughes, Breanne Hughes, Giovanni Jenkins, Madison Jenkins, Rylee Hughes, and Parker Hughes. Vaughn is also survived by brothers, Gary, Bill, Kent, and David Hughes along with his sisters, Janice Reece, Sharon Wixom and Deanne Orgill. He was preceded in death by his parents and his brother Michael Hughes. Funeral services will be held at 11 AM on Friday, April 8, 2016 at the Winder LDS 7th Ward located at, 4350 South 1100 East in Salt Lake City. There will be a viewing held one hour prior to services. Interment will be at Crescent Cemetery 11105 S. State, Sandy, Utah. The family wishes to extend our deepest thanks to Dr. Howard Colman and his team at the Huntsman Cancer Center for their excellent care and valiant efforts over the past year to extend Vaughn’s life and, at its conclusion, along with God, to let him die peacefully without pain, stress, or fear.

The family of Vaughn Ray Hughes created this Life Tributes page to make it easy to share your memories.