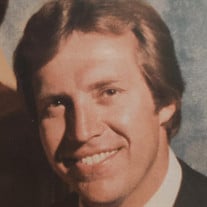 Vaughn was born on April 3, 1935 at the Cottonwood Maternity Hospital in Murray, Utah. His parents were hoping he would be a little sister and had his newborn outfit crocheted in pink. He quickly became the treasured little brother. He was nicknamed, “The Little Prince”, a name his brother Roy, reminded him of throughout his life. The six boys and their Grandfather, Soren, slept downstairs in the basement of the family home. He loved his Grandpa Soren and referred to him as his “Buddy”. Vaughn’s final resting place in the Draper Cemetery will be next to his beloved Grandfather, his Buddy. The Rasmussens were a happy, gregarious, and active bunch, who loved to join together for stories, homemade cherry nut ice cream on blueberry pie, Grammy’s Angel food cake and fun throughout their lives. He saw three of his older brothers serve in World War II, and his favorite “uniform” was his soldier suit. With five older brothers to encourage him, he was completely involved in sports. His natural physical ability enabled him to develop into a multi-sport, talented athlete. When he began to show interest in football, his brother Don set up a car tire on a rope that would swing back and forth as Vaughn attempted to throw it through the tire hole. He played football as quarterback at Jordan High School (yes, he was a true Beetdigger), played on two State Champion basketball teams, and was selected as Athlete of the Year for Jordan High in 1953. He lettered in football, basketball and tennis. Vaughn was offered football scholarships to both the University of Utah and BYU, and opted for the Y. He played one season before breaking his ankle, and ultimately left for Denmark on his mission, following in the footsteps of his older brothers, Father and Grandfather. While in high school he began working at the Florsheim Shoe Store and made retail shoes his life-long profession. He filled a mission in Denmark, and Vaughn and a BYU basketball stand-out, Mac Madsen, were asked to coach the Danish National Basketball Team. He loved that experience and also loved the people of Denmark. With Danish ancestry, it was wonderful for him to meet his Danish cousins while there. In 1960 he married Shari Hoffman from Draper, Utah. They moved to Chicago to start his career with Florsheim. The executives of the Company thought highly of Vaughn. They saw his great potential and he was assigned to open and manage a big, new store in San Jose, California. In 1970 the family moved to Salt Lake City and made their home in the Sandy, Willow Creek area. Vaughn had an amazing ability to draw people to him. His great warmth and charisma drew friends to him, and those friendships endured through his life. He served in the LDS ward, being a much loved Priest Quorum Leader, implementing great programs for the young men, including cleaning the brick walls of a new chapel, and trips to Yellowstone for fabulous snow-mobile and other outings. He also served as both Ward and Stake Clerk. In 1980 he left Florsheim and opened his own store, Vaughn Rasmussen’s Shoes, located in Crossroads Mall. He opened a lady’s store in the Orem Mall, and a discount shop in Rock Springs, Wyoming. He also ran several small shoe departments in privately owned men’s clothing shops around the valley. He and Shari divorced in 1988. In 1995 he married Judy Eagleston. Together they served at the Conference Center for several years. They later divorced. After suffering the effects of dementia for several years Vaughn was ultimately taken from his family after succumbing to the effects of Covid-19. He is survived by his five children: Roger (Suzette), Korey(Alisha), Troy(Stephanie), Kristen Rasmussen-North, Lynnie (Dave Johnson), 22 grandchildren and five great grandchildren. Sisters-in-law, Genielle Rasmussen and Linda Rasmussen also survive him. His many nieces and nephews always loved and honored him. Vaughn will be remembered as a gracious man with a huge laugh, a ready sense of humor and a love of people. He was especially proud of his family, both immediate and extended. Rest in peace, Vaughn Ramon Rasmussen, until we meet again.

Vaughn was born on April 3, 1935 at the Cottonwood Maternity Hospital in Murray, Utah. His parents were hoping he would be a little sister and had his newborn outfit crocheted in pink. He quickly became the treasured little brother. He... View Obituary & Service Information

The family of Vaughn Ramon Rasmussen created this Life Tributes page to make it easy to share your memories.